ATI is licensing and co‑developing its technology with innovative seed companies having the technical sophistication, market reach and financial capabilities to bring yield‑enhanced genome edited products into the marketplace at a large scale.

Prior to joining ATI as a co‑founder, Professor John Thomson had raised more than $6 million in direct funding from government and private sources since 1998 to develop and patent the eIF‑5A/DHS technology applied to crop plants. Professor Thompson’s lab extensively published positive results and patented claims for the use of these genes to enhance shelf life, augment disease tolerance and significantly increase biomass and seed yields.

It is very clear that these impressive findings are widely applicable to many important crop plants, including greenhouse data on banana, tomato, canola and carnation, and field trial data on alfalfa.

Delayed leaf and flower senescence, fruit softening and spoilage was significantly delayed in tomato and banana by down-regulating eIF‑5A1 or DHS.

Plant tolerance to pathogenic fungi and bacterial disease (Pseudomonas syringae) was also increased in tomato in the lab and banana in the field by down-regulating eIF‑5A2 or DHS.

As mentioned, eIF‑5A and DHS are both physiologically critical genes that work together in all plant species and comprise an early critical switch for cell growth or death. Often, at least two eIF‑5A alleles are present in plant species, with each differentially regulated in space and time. There is no addition of foreign genetic material needed; rather well‑characterised eIF‑5A and/or DHS genes from related plant species are transferred into the target crop plant.

A very important technical alternative is to use recently developed genome editing technologies, such as CRISPR‑Cms1, to make “surgical” deletions in a small portion of the DHS or eIF‑5A genes or their control sequences. These highly targeted genetic changes do not require the resulting modified seed products to undergo the USDA‑APHIS deregulation process. These products could be sold in the marketplace much faster with less costs, resulting in increased and accelerated revenues compared to conventional GM crops.

Strong evidence in 5 peer-reviewed publications has shown clear phenotypes from down‑regulation of DHS, including delay of senescence, increased yield, and other commercially important plant traits. Similarly, eIF‑5A3, overexpression has conferred very significant phenotypes and broad applications in multiple crop plants such as:

Secondary benefits of manipulating expression of these two patented genes were demonstrated in disease resistance, and improved shelf life of seeds and fruit. 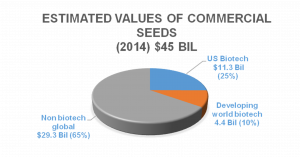 Farmers have widely adopted genetically engineered crop plants, with >432 million acres (~10%) of all croplands planted to GM varieties. In the US, 94% of soy, 96% of cotton, and 93% of corn are genetically modified, with >18 million farmers growing 54% of worldwide GM crops in developing countries. More than 20 major crop plants have been genetically engineered with improved traits, having worldwide commercial sales in 2014 exceeding $15.7 billion[1].

It’s extremely difficult to assess the commercial extent of post‑harvest losses of fresh produce, due to a complex variety of factors. However, climacteric fruit, which is fruit that can be harvested when mature but before ripening has begun, such as banana, melon, papaya, and tomato[2], can substantially benefit from genetically encoded delayed senescence.

The commercial value of tolerance to plant pathogens is also extremely large, since crop losses were estimated in 1988‑1990 to range between 10‑16%, corresponding to US $44 billion[3]. 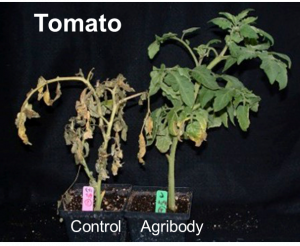 Despite the commercial importance to consumers of delayed senescence/longer shelf life, of greater significance to farmers is the demonstrated potential of upregulating eIF‑5A3 or downregulating DHS for dramatically increased plant biomass and seed yield compared to non‑transgenic controls grown under the same conditions. In the lab, Arabidopsis was shown to have 50% to 300% increased vegetative and reproductive seed mass, with enhanced fitness when exposed to osmotic and nutrient stress[4]. More importantly, canola – a $430 million crop in the US in 2014 – had similar yield increases above and below ground. Both species also showed enhanced stress tolerance to drought, nutrient deprivation, salt toxicity, heat and cold.

Of greatest significance, by constitutively overexpressing eIF‑5A3 in an elite commercial variety of alfalfa, which is the 4th largest US crop, ATI has obtained two years of replicated field trial data proving unprecedented 20% –45% yield increases with little loss of quality. A manuscript has been submitted[5].

Alfalfa is a key component of sustainable agricultural systems: positively impacting soil conservation, nitrogen fixation, energy savings, crop rotation, and wildlife habitat. The ~$800 million of alfalfa seed sold annually in the US underlies a >$8 billion hay market. It has been a very significant challenge over the last two decades to conventionally breed alfalfa for higher yields while retaining high quality.  These two key parameters are often inversely correlated, with very limited annual yield gains of <0.3%. 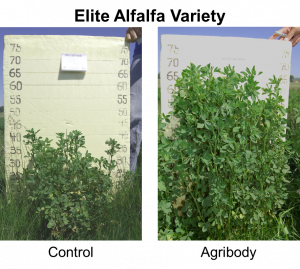 The pathway for “cisgenic” crop deregulation is becoming more predictable and routine, even by small companies, shown by the recent deregulation by the USDA and FDA of extended shelf life Arctic apples developed by Okanagan Specialty Fruits[6] and bruise‑resistant Innate potatoes that have reduced levels of a suspected carcinogen developed by the J.R. Simplot Company[7]. Perhaps even more importantly, modern genome editing methods, such as TALENs, CRISPR‑Cas9, and CRISPR-Cms1, are unregulated by USDA‑APHIS as shown by 69 examples so far.  ATI recently announced its strategic relationship with Benson Hill Biosystems to license and sublicense their CRISPR-Cms1 technology[1].

ATI’s extensive IP portfolio and compelling lab, greenhouse and field trial data regarding its technologies’ practical utility in several large commercial crops, provide ample justification for expanded licensing and co‑development activities with domestic and international seed companies. Our first target is to partner with a major alfalfa seed company, to license and co‑development up-regulated ultra‑high yield eIF‑5A3 gene, or reduced activity DHS, in their elite alfalfa germplasm. We are convinced that the technical risk is very low. 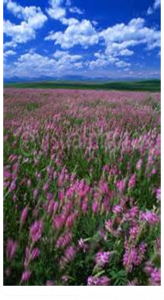 price of a bag of alfalfa seed – for instance, there is a $45 technology fee for a typical $225 50‑lb bag – and that eventually this ultra‑high yield alfalfa will capture 75% of the non‑roundup ready alfalfa seed market, we estimate the technology value of eIF‑5A3 from 500,000 bags to be $22.5 million per year. Global acceptance may double this potential.  Productive discussions, meetings, and licensing and co‑development discussions are in progress with the 2nd largest alfalfa seed company; a letter of interest was received, and term sheets are being negotiated.

Join us at the 7th Digital Pathology & AI Congress: Europe, taking place in Rotterdam in May. Download the agenda here to find out more.