In December 2014, a major flood in north-eastern Peninsular Malaysia affected more than 200,000 people leaving them homeless, with no clean water, and sick with diseases including dengue fever, typhoid, leptospirosis and acute gastroenteritis (approximately 30% of flood-affected population). After 6 months, many were still affected by illness including persistent abdominal pain and diarrhoea. We investigated two of the worst flood-affected communities (Figure A) on their microbiota profile and if a probiotic can help. Following are 5 points I have learned from this invaluable experience: 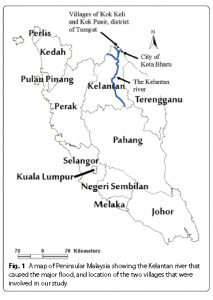 The Walkerton outbreak of Escherichia coli and Campylobacter jejuni in contaminated water reported 36% of IBS cases and in our population, almost half fulfilled the Rome criteria for IBS. Our flood victims reported high IBS severity score, worse quality of life and psychological disturbance. The pathophysiology of post-infectious IBS involves complex cross-talking of altered microbial factors and disturbed gut-brain axis from a microscopically inflamed gut. Please refer to my published review on post-infectious IBS for further information on pathophysiology.1

2. In flood victims with psychological disturbance, the microbial abundance shifts towards the phyla Bacteroidetes and Proteobacteria and with persistent abdominal pain, Fusobacteria predominates. 2

Abundance of these organisms have been associated with gut diseases including inflammatory bowel disease, and especially expansion of Proteobacteria has been considered a significant marker of gut dysbiosis. We also reported abundance of Fusobacteria in victims who reported persistent abdominal pain. Fusobacteria are anaerobic gram-negative bacilli that have been implicated in acute appendicitis, inflammatory bowel disease and small intestinal bacterial overgrowth.

3. In flood victims with post-infectious IBS, there is altered microbial abundance with Plesiomonas and Trabulsiella predominate. 2

In patients with post-infectious IBS, bacteria and viruses were most commonly implicated. Among the bacteria, most reported pathogens have included Shigella, Salmonella, Campylobacter and Escherichia coli. In patients with diarrhoea-predominant IBS, a related condition, studies have shown increases in numbers of Proteobacteria and Firmicutes and reduction in Actinobacteria and Bacteroidetes.

Our report, for the first time, has shown altered microbial profile in flood victims who developed post-infectious IBS (Figure B). The origin for these organisms is unknown but it is high likely they are derived from contaminated flood water as these organisms are environmentally derived. Flood victims in our studies have poor water, sanitation and hygiene (WaSH) scores that remained so even after 6 months post-flood. The organisms may have been pre-existing pathobionts that have expanded following initial flood-related gastroenteritis. 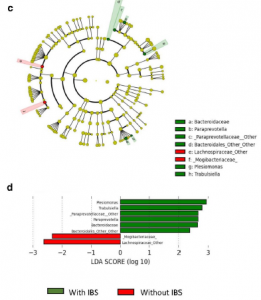 4. Mental health and anxiety in flood victims with post-infectious IBS improve with a probiotic. 3

Administration of a probiotic, Bifidobacterium infantis M-63 for three months is associated with improvement in anxiety and mental health of flood victims with IBS. In addition, bodily pain in these patients improves after the probiotic. It is known that some strains of Bifidobacteria have properties of a psychobiotic probably through their effects on the gut-brain axis by inducing neurochemical modulation. For example, Bifidobacterium infantis 35624 has been shown to normalize noradrenaline levels in the brainstem region that regulates mood but also alters other neurotransmitters, such as gamma-aminobutyric acid and serotonin. It is unknown the neural mechanism that underlies the effectiveness of Bifidobacterium infantis M-63 in IBS, and this merits further mechanistic studies.

Previously, it was known that IBS is associated with lower abundance of Bacterioidetes but higher abundance of Firmicutes. We found that the probiotic Bifidobacterium infantis M63 that was administered to flood victims with IBS increases Bacteroidetes and restores the ratio of Firmicutes to Bacteroidetes (Figure C), and this also correlated with improvement in their mental health (Figure D). 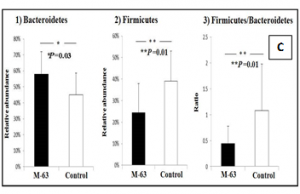 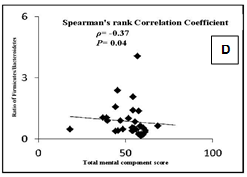 In summary, disturbed gut microbiota because of environmentally-derived organisms may explain the development of IBS in flood victims especially in presence of poor WaSH practices. Specific probiotic is probably effective in improving mental health and bodily pain of these flood victims through restoration of microbial balance and the effect on gut-brain axis.

Lee Yeong Yeh
is Professor of Medicine, and Consultant of Gastroenterology, Hepatology and Internal Medicine at Universiti Sains Malaysia. He will be speaking at the 4th Probiotics Congress: Asia on 6th-7th March 2019.