How To Avoid Unnecessary Data Loss In qPCR Reactions 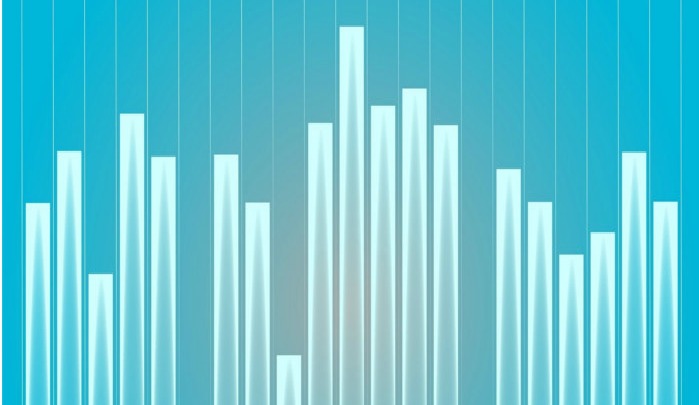 Analysing qPCR data has always been based on setting a quantification threshold and determining the Cq value which is the fractional number of cycles needed to reach the threshold. Using the Cq, the threshold and the PCR efficiency the absolute or relative starting concentration of the amplified DNA sequence in the original sample can then be calculated. This means the Cq value will inevitably translate into variation in the outcome of the qPCR experiment.

When the qPCR experiment is based on technical replicates, the criterion for reproducibility is most often set to 0.5 cycles. This means that results for the biological sample are discarded when the Cq values of replicate reactions differ more than 0.5 cycles. The idea is that this rule-of-thumb should be enforced to protect against the inclusion of too much technical variation in the analysis of the qPCR results. A simple calculation learns that a 0.5 cycle difference in replicate Cqs results from a pipetting error of 15%, irrespective of the target copy number. Accepting such an error would indeed be unwise.

However, at low copy number, which is at high Cq values, the sampling error that occurs when pipetting a low number of target molecules into the PCR plate is the dominating factor that determines the observed variation in Cq values. This sampling error is governed by the Poisson distribution and is unavoidable. Therefore, when pipetting multiple times from a stock with 10 actual copies per pipetted volume, by chance also 8 or 12 copies may be pipetted into the reaction plate, causing variation around the actual copy number: no pipetting skill can prevent this variation. The number of target copies pipetted into the reaction plate will thus always show a distribution with the highest probability at the actual number of targets and a standard deviation equal to that number. The lower the copy number, the higher the relative error. With an input of 3 copies per reaction volume, 5% of the wells will not even contain the target.

To calculate the magnitude of this sampling error for different Cq values, we started with the assumption that for a PCR efficiency of about 1.8, an input of 10 copies of target leads to a Cq value of about 35 when the primer and amplicon concentration become similar. A calculation starting with a primer concentration of 1 pMol shows that the decreasing primer concentration and increasing amplicon concentration reach similar values after 35 cycles. Primers and amplicon then start to compete for single strand amplicon molecules which will lead to a decreasing PCR efficiency and thus an end to the exponential phase of the amplification. Of course, the actually observed Cq value will depend on the PCR efficiency, the monitoring chemistry, the pre-processing of the fluorescence data and the way the Cq  value is determined. Therefore the numbers 10 and 35 in the following equations may have to be adjusted to the actual qPCR protocol.

When the PCR reaction reaches the quantification threshold, the general kinetic equation can be written as Nq = N × E Cq (Eq.1) which, with the above assumption, can also be written as Nq = 10 × E (35) (Eq.2). This equation allows us to estimate the target input from the observed Cq value and PCR efficiency: N = 10 × E (35 – Cq) (Eq. 3). Using the relationship between Poisson and Chi2 distributions, the 95% confidence interval of N is then given by: ½ χ2 (0.025;2N) ≤ N ≤ ½ χ2 (0.975; 2N+2) (Eq. 4). For each Cq and PCR efficiency value we can thus calculate a number of copies with Eq. 3, the sampling error range with Eq. 4 and then, with the inverse of Eq. 1, the expected range of Cq values due to unavoidable sampling variation. This range increases with higher Cq values (less target) and easily leads to a differences between replicates that are above 0.5 cycles (Table 1; Figure 1). 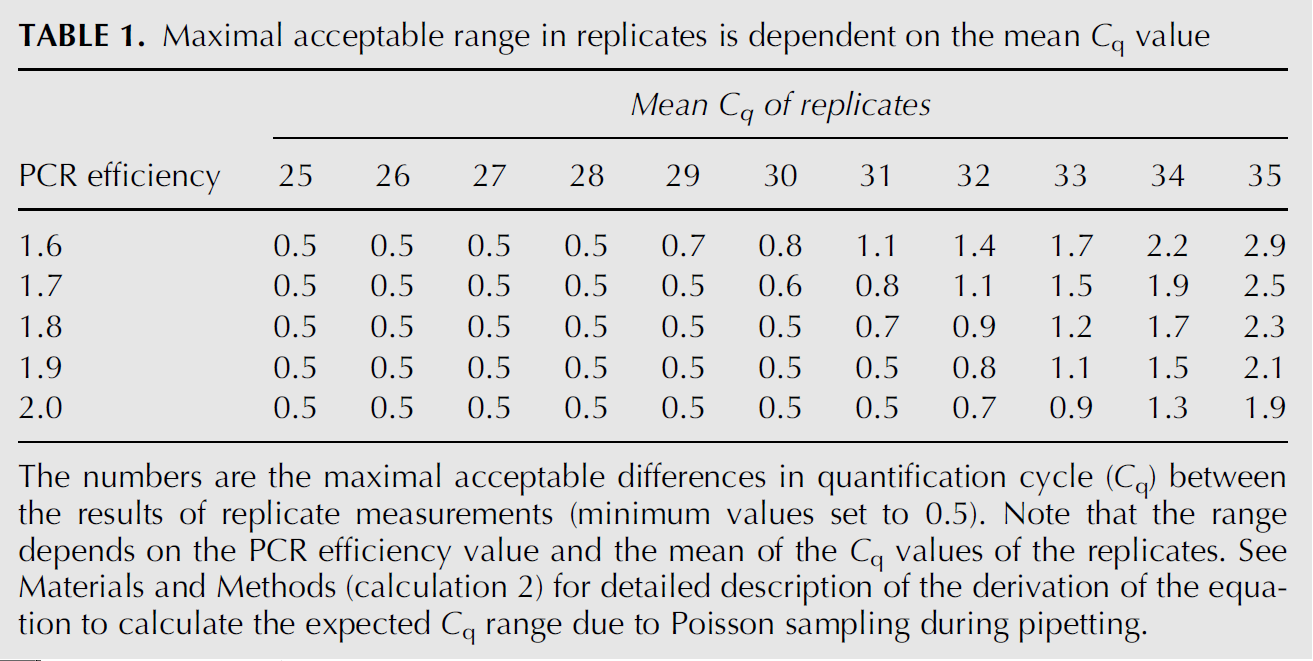 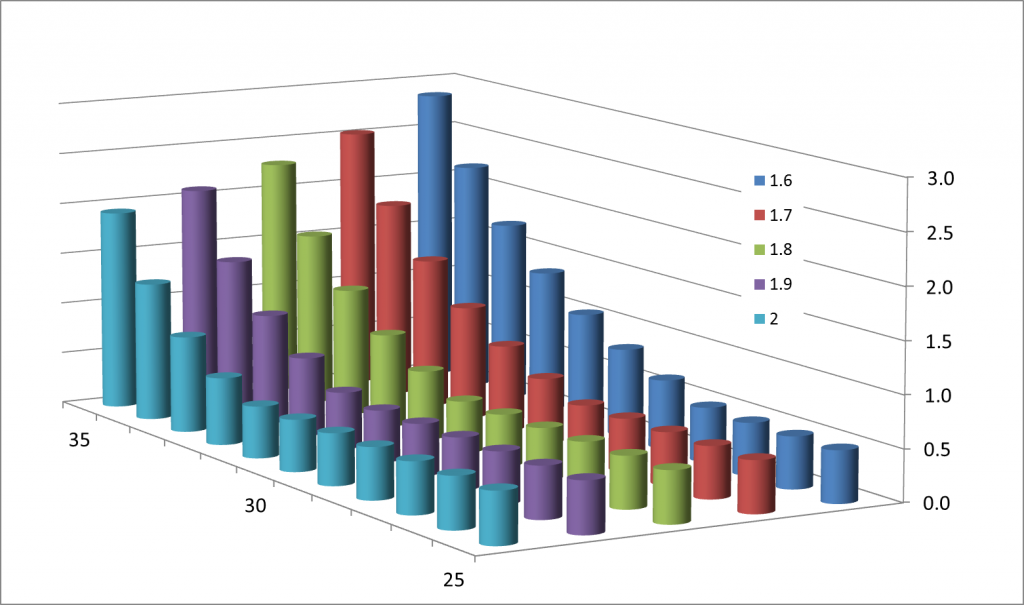 Figure 1. The maximum acceptable Cq difference between replicates increases with increasing mean Cq of the replicates (lower copy number input in the reaction) and is dependent on the PCR efficiency. In the graph 0.5 cycles is considered to be the maximum allowable Cq range for Cq values where pipetting error is the prevalent cause of variation (de Ronde et al., RNA 2017).

Discarding such discordant replicates will lead to bias and loss of power in the analysis. For a dataset that resulted from the qPCR measurement of 12 miRNA targets in 834 patients with a total of 20,016 reactions, the strict application of the rule that the Cq values of replicates should be within 0.5 cycles led to rejection of 7752 (39%) measurements. When the unavoidable Cq range, calculated as described above, is taken as a Cq difference between replicates that is still acceptable, the number of reactions that should be discarded decreases to 1414 (7%).

Not only less reactions are discarded, but also the distribution of Cq values changes, which shows that strict application of the Cq<0.5 cycle rule has led to bias in the results of the qPCR experiment. A decision to exclude replicate reactions based on the expected sampling error avoids this bias, prevents unwanted loss of data and therefore increases the statistical power of the qPCR experiment.

Jan M Ruijter
is a medical biologist with experience in endocrinology, neurobiology, ophthalmology and embryology. He is currently appointed as principal investigator in the department of Medical Biology, section Embryology at the Academic Medical Centre, Amsterdam, the Netherlands.

Come and hear more about Jan’s research at the 5th qPCR & Digital PCR strand at the 4BIO Summit.