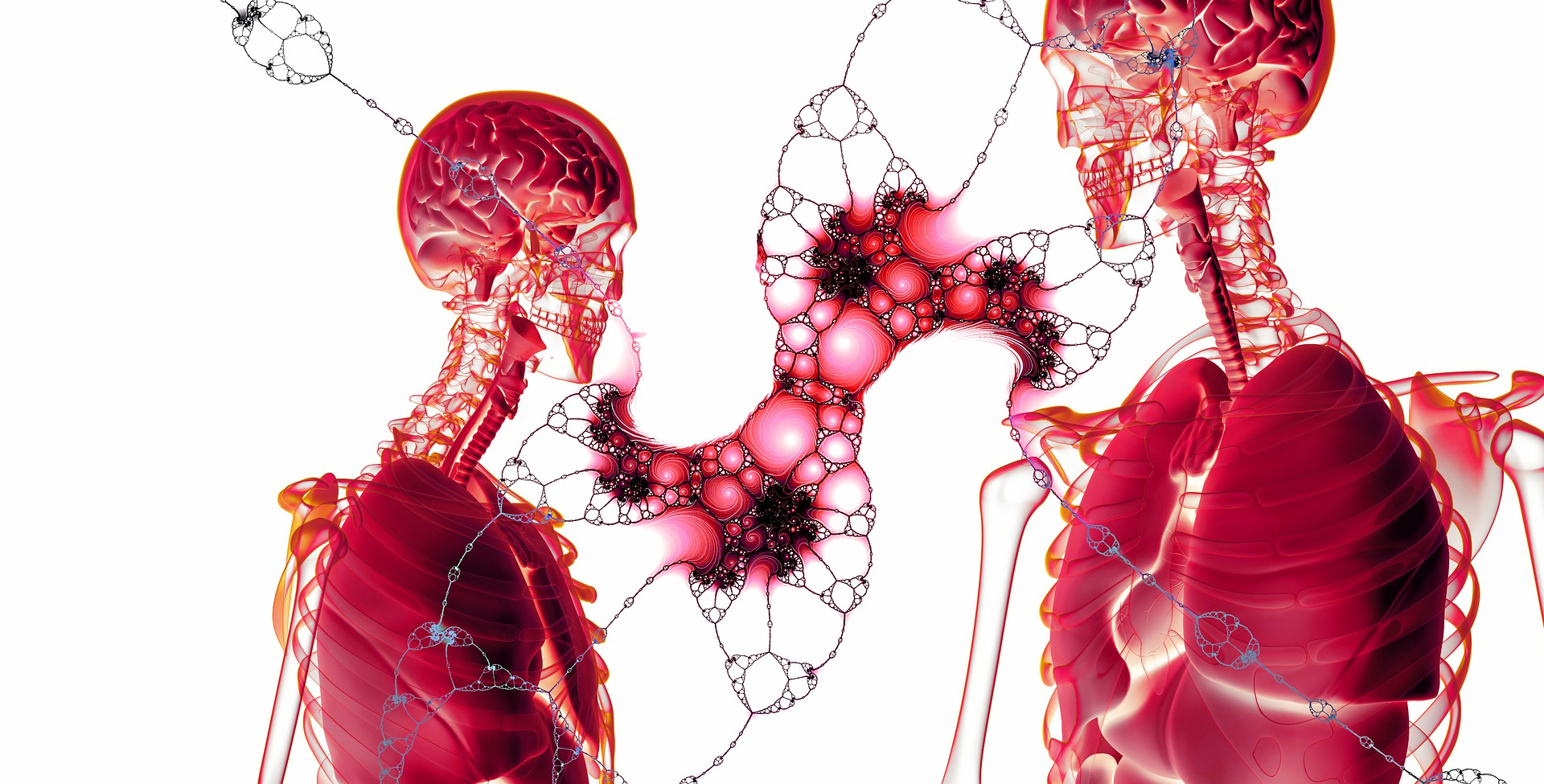 Most tissues in our body are complex entities, containing multiple support structures like vascular networks. Ideally, this complexity should be reproduced when engineering a tissue substitute. This is important for functionality if the goal is to use the engineered tissue as a substitute for donor material, but also to ensure a physiological response in cases where the tissue will be used as a screening platform.

Using the multiple biofabrication tools that have been developed over the last years, such as photopatterning and bioprinting, researchers are currently able to reproduce tissue complexity within engineered tissues. Multiple materials, cells, and chemical factors can be precisely positioned within a 3D environment with a resolution that approaches the cellular scale. A high resolution often comes at the expense of long fabrication times, but this is an engineering problem that is likely to be solvable in the (near) future. What I foresee to be a bigger problem, however, is tissue dynamics.

Tissues are not static entities. Tissues continuously remodel, partially based on varying environmental cues and changes in tissue functionality and demands. This remodelling is not limited to tissues in vivo, but it is also an important factor within tissues that are cultured ex vivo. What this means is that highly complex and detailed tissues that have been painstakingly created using biofabrication technology, run into the serious risk of losing their organisation over time. For my own research focus in the inclusion of vascular networks within engineered tissue, this means the following: without additional cues to control tissue remodelling, a carefully designed branched vascular network can for instance revert to a randomly organised collection of vascular structures.

The role of tissue dynamics

It is clear that tissue dynamics are an important factor to take into account when engineering complex tissues. However, it should be seen as a feature we can use to our advantage, and not as a danger to our endeavours. If I again relate it to my own research focus, an alternative approach to control the architecture of vascular structures, as opposed to a fabrication approach where the architecture is forced upon the cells, is to include local cues to guide vascular organisation and remodelling. By patterning for instance growth factors, matrix mechanical properties, or fluid flow through the matrix, vascular organisation can be guided. Therefore, the adaptation of local microenvironments potentially offers the possibility to engineer a complex, predictable vascular organisation, starting from an initial random distribution of vascular cells. Even though this approach is less straight forward than the direct patterning of cells, guided morphogenesis may result in a better control of vascular organisation in the long term due to an inherent control over the remodelling process.

In order to engineer a functional and complex tissue, it is still important to invest in biofabrication technology to have an optimal control over local tissue environments. After the initial fabrication step tissues will develop further, which generally results in tissue remodelling. By offering the right environmental cues to the developing tissue, some of which can be included during the initial fabrication stage, tissue remodelling can be controlled to a large extent. So, we should do our best to shape the optimal starting situation. But after this, we have to let nature take its course to end up with the optimal and stable complex tissue. 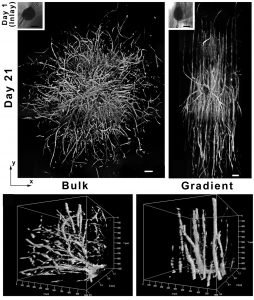 Vascular sprout invasion within PEGDA hydrogels. Flattened 3D mosaic renderings of co-culture aggregates seeded in (A) bulk control hydrogels as well as in the (B) top, (C) middle, (D) and bottom regions of PBFP gradient hydrogels.

Aggregates were fixed after 21 days in culture and stained for F-actin (Note: the gradient runs in the y-direction in B, C, and D with elastic modulus and YRGDS concentration increasing in the direction of the top of the image. [1]

This example by Turturro et al shows how embedded environmental cues can be used to control the natural organisation of vascular cells. In this case, a PEG based hydrogel containing a combined gradient in material stiffness (stiff at the top and soft at the bottom of the image) and the concentration of the cell adhesion ligand YRGDS (high at the top and low at the bottom of the image) is compared with a similar hydrogel that has the same bulk properties throughout the volume of the gel. Where the organisation of the vascular cells is random in the bulk hydrogel, the organisation is directional in the gradient hydrogel.

In order to engineer a functional and complex tissue, it is still important to invest in biofabrication technology to have an optimal control over local tissue environments. However, it is of the utmost importance to realise that the initial fabrication step tissues will develop further, which generally results in tissue remodelling. By offering the right environmental cues to the developing tissue, some of which can be included during the initial fabrication stage, tissue remodelling can be controlled to a large extent. So we should do our best to shape the optimal starting situation, but after this we have to rely on tissue remodelling and let nature take its course to end up with the optimal and stable complex tissue.

Jeroen will be speaking at the Global Biomaterials & Tissue Engineering Congress. To find out more, take a look at the agenda.