The Human Microbiome in Focus: Probiotics, Modulation and Translation – Part 1 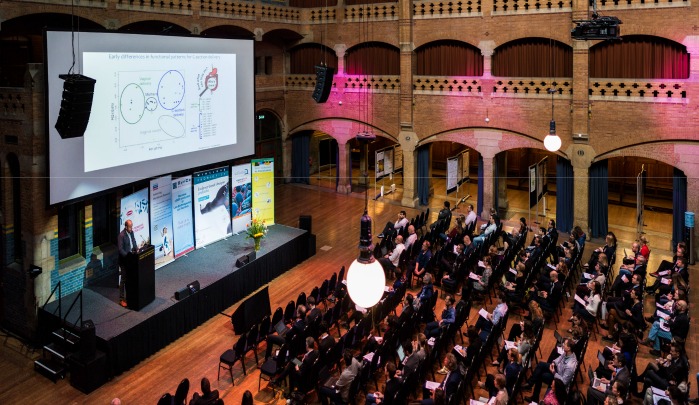 Duc H. Le, UK Editor-in-Chief of EBioMedicine, summarises some of the presentations that took place on day one.

Vaginal Microbiota-Maternal Host Interactions and Their Influence on Pregnancy Outcomes

Vaginal bacterial communities dominated by Lactobacillus species are generally thought to promote healthy reproductive outcomes during pregnancy. Disturbance of these communities is associated with increased risk of poor outcomes, including preterm birth (PTB).

The researchers also showed that treatment interventions used for PTB prevention can impact upon vaginal microbiota composition. For example, while vaginal progesterone supplementation has minimal impact on community composition, cervical cerclage using braided suture material strongly promotes dysbiosis and is associated with activation of local inflammation and premature remodeling of the cervix. The use of erythromycin for treatment of women with preterm prelabour rupture of membranes (PPROM) also promotes dysbiosis, which may negatively impact both maternal and neonatal outcomes.

The researchers then presented a novel application of the ambient mass spectrometry-based method, DESI-MS (Desorption Electrospray Ionisation Mass Spectrometry) for assessment of vaginal mucosa metabolic profiles directly from medical swabs. This approach provides information about the composition of microbiota at different mucosal sites and their interaction with the host that could potentially be used to inform clinical decision making during pregnancy.

A role for the microbiome in the initiation and maintenance of intestinal disease activity in patients with inflammatory bowel disease (IBD) is starting to emerge, with a decreased microbial diversity and an increased presence of Proteobacteria and Actinobacteria among the most often found dysbiotic components.

Research by Gwenny Fuhler (Rotterdam, The Netherlands) and colleagues has shown that bacterial handling by innate immune cells is impaired in IBD patients. Furthermore, they showed that impaired host defence mechanisms in IBD patients can result in an increased presence of adherent invasive Escherichia coli species in the gut mucosa. IBD is associated with several extra-intestinal manifestations, including skin diseases such as psoriasis and hidradenitis suppurativa. The role of gut dysbiosis in IBD-associated diseases remains to be explored.

The researchers therefore examined gut and skin microbiome of patients suffering from IBD, IBD and concomitant skin disease, or skin disease only. They showed a reduction in abundance of faecal Faecalibacterium prausnitzii and an increased abundance of E. coli in patients with IBD or psoriasis, compared to healthy controls, suggesting that a link between the gut microbiome and psoriasis might exist. However, the same was not observed for hidradenitis suppurativa.

The authors went on to demonstrate that oral treatment of psoriasis with dimethylfumarates restores mycobiome dysbiosis in psoriasis patients. Whether or not UV treatment for skin diseases has an impact on the patients’ gut microbiota is being investigated.

The skin acts as an important interface between the organism and the external environment, but also represents an ecosystem providing distinct niches for microbial communities. Next-generation-sequencing approaches used to characterise the cutaneous microbiome in healthy skin compared to lesional skin from psoriasis patients revealed significant differences in the composition of the microbiota.

The vast majority of bacteria present in healthy human skin belong to the four phyla Actinobacteria, Firmicutes, Proteobacteria and Bacteroidetes. However, a marked decrease in the total diversity of microbial communities, an over-representation of Proteobacteria and an under-representation of Actinobacteria has been observed in lesional skin from psoriasis patients compared to corresponding non-lesional skin from the same individual.

Karin Loser (Muenster, Germany) and colleagues characterised the cutaneous microbiota in lesional and corresponding non-lesional skin from psoriasis patients before and at different time points after the start of treatment with different biologics, including TNF-α blockade, IL-12/23 blockade, fumaric acid esters or phosphodiesterase inhibitors.

The researchers found that clinical improvement as measured by Psoriasis Area Severity Index (PASI) correlated with alterations in the composition of the microbiome. Thus, successful treatment could help to “normalise” the microbiota in lesional skin of psoriasis patients.