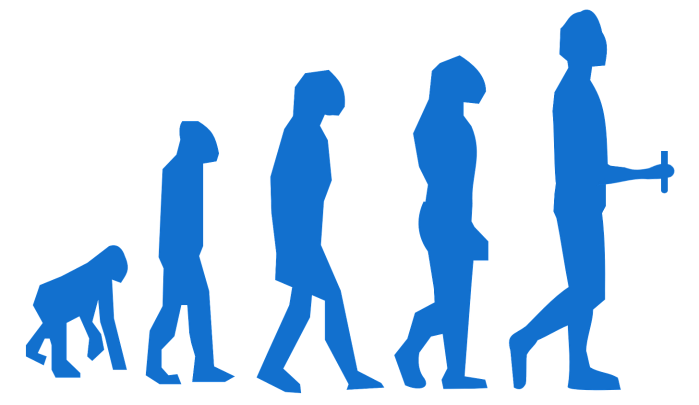 They weren’t complex but they reproduced fast – adapting to the catastrophic events (underwater volcanic activity, change in temperature and chemical composition) of their environment in the oceans of the primordial Earth. Then telluric activity calmed down somewhat, the oxygen content of Earth’s atmosphere increased, and complexity grew. Vertebrates conquered the continents, but their comparatively slow rate of reproduction opened the door to mass extinctions when they could not cope with catastrophic changes in their environment.

Inside and around those ‘higher’ species, microorganisms were still active

It may be difficult to study dinosaurs’ microbiota, but it stands to reason that they, and all vertebrates with them, had symbiotic microorganism communities. To quote a 2008 paper by Jeff Gordon, Rob Knight and co-workers “an already long history of interaction between multicellular life-forms and microbial communities preceded, and likely shaped, the evolution of the vertebrates” (1)

Fast-forward to today, with two levels of evolution at work

This happens slowly because we humans reproduce every 30 years or so, and with decreasing efficiency. The progress of medicine is slowing evolution further, but thankfully enables more and more individuals ‘biologically’ less adapted to their environment to lead productive lives and have children. The second level of evolution, in our microbiota, is all the more important to help us ‘fit’ with a rapidly changing environment. Assuming average replication times of one to three hours, microorganisms ‘reproduce’ at the order of magnitude of a hundred thousand times faster than we do, and therefore can adapt to events and changes unfolding at a faster clip.

Identifying this has been a major scientific revolution

As grating as Galileo’s finding that Earth was not the centre of the universe, the notion that we deeply depend on humble microorganisms for our health and welfare has taken hold, and not before time. There is no way ‘human’ biological evolution can keep up with the rapid changes in our environment. Technology, in the form of new medical and nutritional solutions, help us to cope with pollution, sedentary habits and other contemporary ills. These technologies will make another giant leap forward if they harness the potential of the rapidly evolving microbiome and its highly complex, easily disrupted interface to our slow moving and increasingly maladapted ‘human’ physiology.

Eating habits change beyond recognition when people move from countryside to cities (more industrial/sterilised foods, less variety), and again when they reach middle class status (more meat, less water, more carbonated drinks). Metabolic diseases and allergies (coeliac disease etc.) have reached epidemic proportions. Infants are increasingly born via C-section, and fed formula milk, which limit and skew the richness of our intestinal microbiota. Human immune systems were once educated by a much wider variety of organisms in the early stages of life. Sophisticated symbiotic relationships controlling the waxing and waning of appetite are reduced to rubble by carbonated drinks supplemented with corn syrup. Many chronic diseases, which limit our quality and span of life, can be alleviated by a more functional microbiota.

It is urgent to harness and optimise our microbiomes to help us cope with the relentless changes in our environment, at every stage of life. A lot of hope rests on excellent research being translated into diagnostic, nutritional and pharmaceutical products, which noticeably help re-establish balance, thus curing or preventing diseases and making our health systems more cost effective. In order to bring those much-needed products to all who need them, investment needs to be directed at entrepreneurs which carry those hopes.

Eric de La Fortelle
is a Venture Partner in the Life Sciences Team of Seventure Partners. Eric is a scientist by training, with contributions in the field of protein structure determination by X-ray crystallography.

2 Responses to “Microbiome: Evolution and Revolution”