There are thousands of different varieties of rice worldwide, with some being more tolerant to salt than others. Our starting point was to compare some (around 300) of these varieties at the genome level and to identify differences that could explain their diverse responses to salt. Juan Pathistan, a former PhD student in the lab, carried out a genome wide association study (GWAS) (Patishtan et al., 2017) which allowed to pinpoint small variations in the genome (single nucleotide polymorphisms; SNPs), that point to candidate genes involved in salt tolerance.

We are now validating a selection of these candidate genes identified from this salinity GWAS. For this we have generated knockout mutants for each individual gene and are looking at their responses to different salinity treatments. In Figure 1 is shown a typical hydroponics assay for phenotyping different mutants. 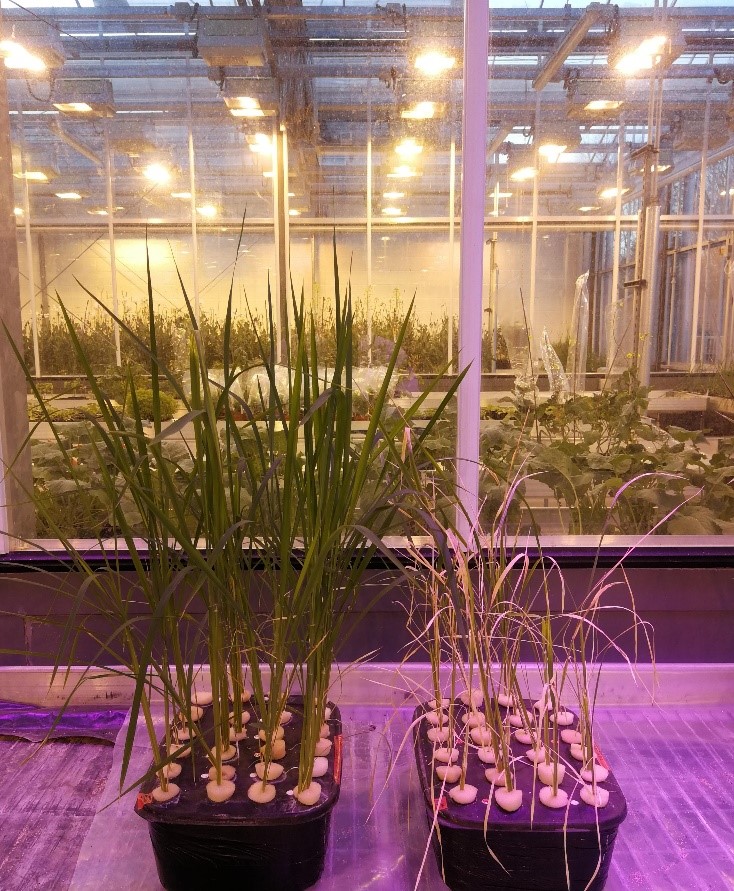 To generate the knockout mutants, we developed a genome editing platform using CRISPR/Cas9. Guide RNAs (sgRNAs) were designed to target each candidate gene.

Using the versatile Golden Gate cloning system, two sgRNAs for each gene were cloned into a binary vector together with the Cas9 and the HptII (Hygromycin resistance) genes, for Agrobacterium-mediated transformation. Rice calli were infiltrated with Agrobacterium and then selected on Hygromycin plates. The surviving calli were then transferred to media for shoot and root regeneration.

The CRISPR/Cas9 system introduces specific double strand breaks (DSBs) at the target sites, which are determined by the sgRNAs. These DSBs are then repaired by the cell by two different pathways, homology-directed repair (HDR) or non-homologous end joining (NHEJ).

The latter is the most prevalent repair system in plants, but it has imperfections that can introduce short insertions and deletion during joining of the broken DNA ends. These mutations can cause a frame-shift in the coding sequence, which typically disrupts gene function. In order to maximize the chances of obtaining a non-functional allele, the sgRNAs were designed to target sites nearer the ‘N’ terminus of the protein.

We found rice to be very amenable to CRISPR genome editing, with almost 100% efficiency in isolating homozygous mutants for some sgRNAs in some genes. One of the advantages of using CRISPR in rice to generate knockout mutants is that we are able to obtain homozygous mutants immediately in the T0 generation, and can then phenotype the T1 generation.

Such a tool for generating knockout mutants is vital when studying mechanisms such as salt tolerance that involve many different types of responses, and therefore complex networks of genes.

While generating knockout mutants using CRISPR/Cas9 technologies has become relatively routine, achieving gene replacements has proven rather more challenging. As mentioned above, DSBs can also be repaired by HDR, in which nucleotide sequences are exchanged between two similar or identical molecules of DNA. This is a high-fidelity process that enables genome modifications by using a homologous donor DNA, but the downside of it is that it occurs at a very low frequency.

An interesting approach to generate precise gene replacements in rice has been described by Caixia Gao and co-workers (Li et al., 2016). Taking advantage of the dominant NHEJ repair pathway and relying on the fact that it can also capture foreign DNA molecules when repairing the DSBs, these authors were able to replace an exon of the rice endogenous gene 5-enolpyruvylshikimate-3-phosphate synthase (EPSPS) with a new exon containing several mutations that confer resistance to the herbicide glyphosate. Since NHEJ is prone to introduce errors, the sgRNAs were designed to target the introns flanking the donor DNA template.

In our lab, we are also developing a strategy for gene replacement in rice. Using a similar NHEJ approach as Li et al. (2016), we have added a positive-negative selection system, envisioning an increase in targeted gene insertion efficiency. As proof of concept, we are using the ALS1 gene that encodes an enzyme involved in the synthesis pathway of branched-chain aminoacids. Two mutations in the coding sequence of this gene are known to provide plants with herbicide resistance.

Our strategy is to simultaneously replace the ALS1 with a mutated version of this gene and insert the HptII hygromycin resistance gene for positive selection. For the negative selection we are using the mCodA gene, encoding a cytosine deaminase, which in the presence of the non-toxic compound 5-fluorocytosine converts it to the toxic 5-fluoroacil compound. This will ensure the elimination of undesired T-DNA integrations and selection of true gene replacement and insertion events only.

Raquel Carvalho is a Postdoctoral Research associate at the Univerity of York, UK. She will be presenting on her work at the 7th Plant Genomics & Gene Editing Congress.

To see which other topics involving CRISPR/Cas9 and Plant Genetics are on offer at the 7th Plant Genomics & Gene Editing Congress, take a look at the agenda.