Our understanding of the aberrant biological pathways (oncogenic pathways) that are involved in the formation and progression of cancers has increased with huge leaps in the last decades of cancer research. The ever-increasing knowledge was and still is accompanied by the development of increasing numbers of precision drugs, tailored to neutralize these aberrations.

In spite of these developments, cancer is still one of the leading causes of death with yearly more than 10 million victims worldwide. A reduction of death rates for some cancer types has been accomplished by the introduction of population-based screening programs, allowing the cure of early-stage cancers by local surgical treatment. Treatment of patients with advanced cancers, however, remains cumbersome despite the availability of this wide variety of precision drugs. Although there are reports of impressive and durable responses with targeted drugs (discussed below), these mostly concern case reports.

When applied in large groups, results of treatment with these drugs is mostly limited to a prolongation of median progression-free survival. Does this need to be? Here, a potential solution will be discussed that could result in more efficient cancer health care. This solution involves treatment with precision medicines in the first line, based on algorithm-based analysis of druggable biological pathways that are detected in tumour tissue via RNA next-generation sequencing.

Whereas the term ‘personalised’ treatment has been introduced for the group of targeted precision medicines, we must ask ourselves the question how personalised these treatments actually are. Targeted cancer drugs are approved by the responsible authorities based on a positive outcome of phase III, and sometimes even phase II clinical trials, in which a targeted drug performs better than the conventional treatment. Performance of such trials is mostly defined as prolonged median progression-free survival or overall survival. A current successful example is the group of immune checkpoint inhibitors that activate the immune system and induce durable responses in subgroups of patients with advanced melanoma.

Unfortunately, the patients who do not respond1 are overtreated with these expensive drugs and may experience more or less severe side effects. Similar situations apply to many precision medicines, raising an important problem: we do not know which drug should be given to which patient. Concomitantly, cancer-associated costs have risen to unsustainable levels. In an attempt to reverse this trend, oncology research is now dominated by the search for predictive biomarkers for each drug.

The rapid developments and declining costs of next-generation sequencing have raised hope that predictive biomarkers can be inferred from genetic mutation analysis. Many efforts are currently ongoing to detect genetic mutations in tumour DNA isolated from tumour tissue or from circulating tumour DNA in blood. For some drugs that are designed to inhibit mutated oncoproteins (e.g. vemurafenib, indicated for melanoma patient carrying the oncogenic B-RAFV600E mutation), genetic analyses are unambiguous. For many other drugs, DNA analysis is however not informative. These drugs target biological pathways that involve normal cells with normal genes.

An example is a class of drugs that inhibit blood vessel formation in cancers (angiogenesis inhibitors), introduced based on the concept that cancers need an appropriate blood supply for their development. Angiogenesis in cancers is the result of a highly complex interplay between tumour cells that start secreting growth factors upon sensing a shortage of oxygen and nutrients, and blood vessel-associated cells that respond to these factors. The genes involved in this pathway become activated via complex regulatory mechanisms. Detecting the activity of this pathway in a particular cancer could have predictive value for response to angiogenesis inhibitors.

Besides the lack of adequate predictive biomarkers for many precision medicines, there is another reason why the outcome of treatment with these drugs remains disappointing in many cases. In clinical practice, precision medicines are applied as a last resort for advanced cancer patients who often have been heavily pretreated with and developed resistance against multiple lines of chemotherapy and radiotherapy. A result is that these patients carry multiple genetically heterogeneous subclones of an unknown molecular composition. The increased genetic instability and heterogeneity induces a plasticity that allows tumour subclones to quickly adapt to the precision drugs and become resistant.

Ironically, whereas precision medicines aim to block defined biological aberrations in cancer, a situation has evolved in which these expensive therapies are actually used to treat molecularly poorly defined cancers. An illustrative and troubling example is non-small cell lung cancer: after the failure of chemotherapy patients with EGFR amplification may be treated with the EGFR inhibitor erlotinib. This treatment may result in the selective outgrowth of resistant tumour subclones with an acquired EGFRT790M mutation that will be responsive to the EGFRT790M-specific drug osimertinib. This treatment again induces selective outgrowth of other subclones with yet other mutations. In other words, the cancer will always beat the precision drug by being one step ahead of the oncologist.

Is there a solution?

The problems in oncology can be summarized by the following issues:

Treatment of patients with precision medicines in the first line may solve part of the third problem, but requires that reliable predictive biomarkers are available based on which an objective and rational treatment decision can be made. Because precision medicines aim at interfering with biological pathways, we should collect information on the whole of these pathways in cancer to be able to make rational treatment choices. This can be achieved by measuring the activity of the pathway-involved genes by analysis of the transcriptome, the collection of RNA molecules that are transcribed from active genes. Whole RNA next-generation sequencing (wRNA-NGS) gives comprehensive information on gene activity and simultaneously detects mutations in the active genes.

At Radboudumc we have set up a robust method of targeted RNA-NGS (t-RNA-NGS) based on the use of single molecule molecular inversion probes2 for an explanation of the technique) that allows us to count and sequence RNA molecules that are produced from hundreds of genes. Because the technique measures activity of only a selection of relevant and druggable genes with known involvement in a wide variety of cancers, it is highly cost-effective. As a proof of concept study, we have used the technique to generate gene expression- and mutation profiles from 75 brain tumours with full clinical follow-up. Bio-informatic analysis of the data showed that the profiles carry highly significant prognostic information.

Based on the concept that the behaviour of a cancer is defined by its molecular composition, rather than by its tissue of origin, mapping of all known oncogenic pathways in a cancer with this t-RNA-NGS assay, possibly allows effective drug repurposing. 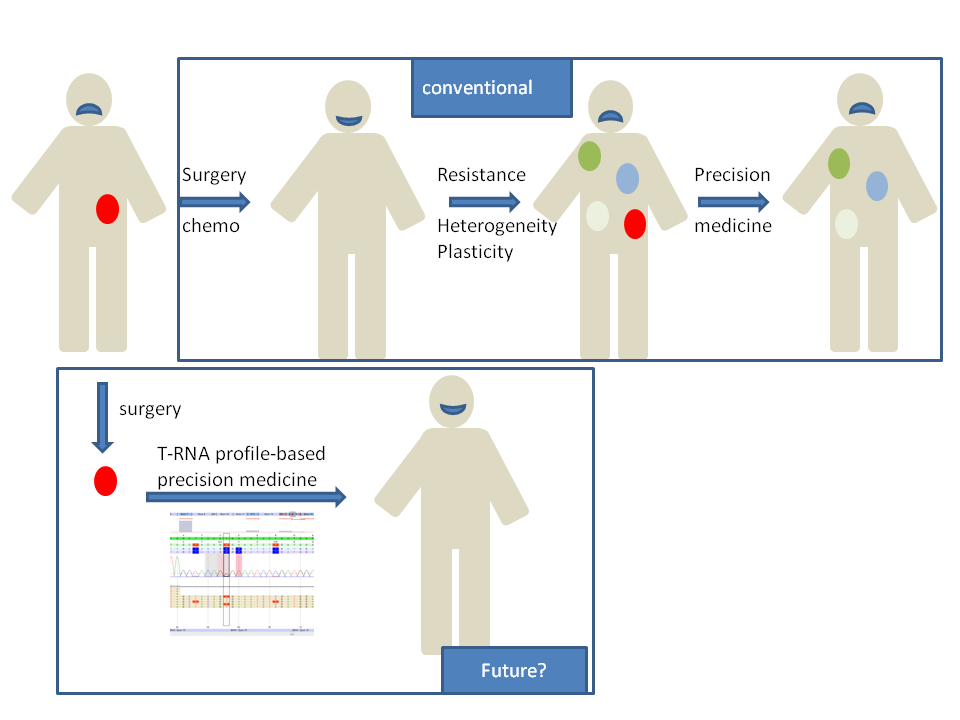 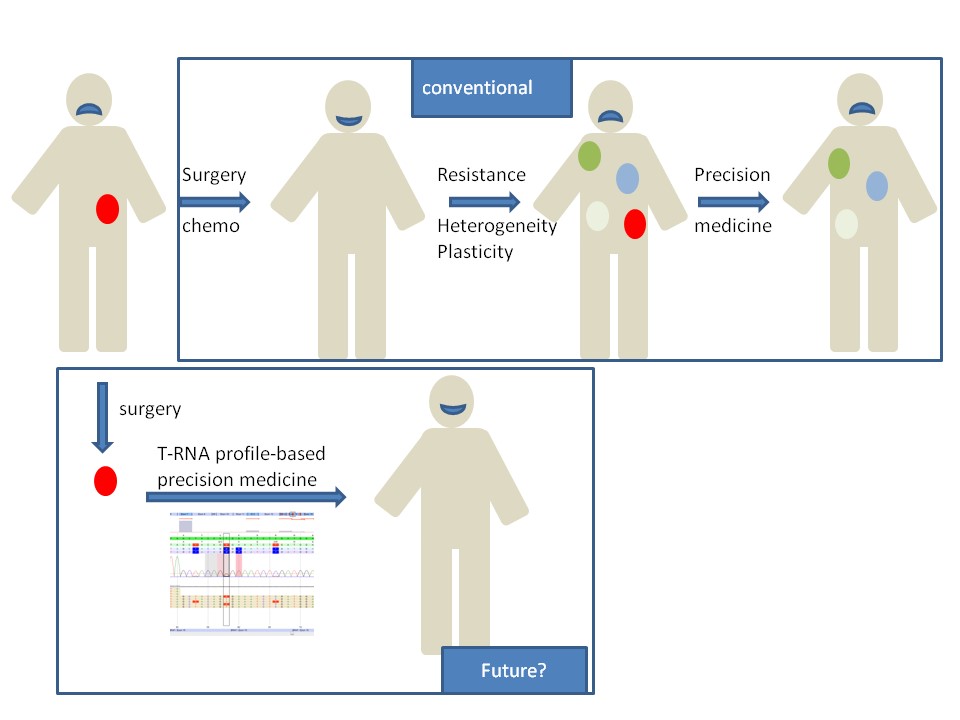 It is extremely important to introduce uniformity and rationality in the treatment of cancer patients. Assays such as the t-RNA-NGS assay that provide detailed insight into the biology of individual cancers, concomitant with detection of genetic mutations, may help to achieve this. Because the technique is cost-effective, generation of t-RNA-NGS profiles from all cancer patients after first surgery/biopsy is feasible, allowing application of precision medicine in first line in the unlucky event that this patient needs systemic treatment.

The choice of precision medicine will still be difficult. A good start would be that t-RNA-NGS assays are implemented in clinical studies. Meticulous administration of t-RNA-NGS profiles in databases, together with response to precision medicines and clinical outcome, will allow pattern finding by bio-informatic analyses of the databases and in the future allow computer-guided treatment suggestions. This will be a long path and requires careful biobanking of tumour tissues and extensive collaborations between (academic) hospitals and pharmaceutical industries and involvement of expert bio-informaticians.

For more information on the 4BIO Summit, read the full agenda.

This article was originally posted by Healtheuropa.