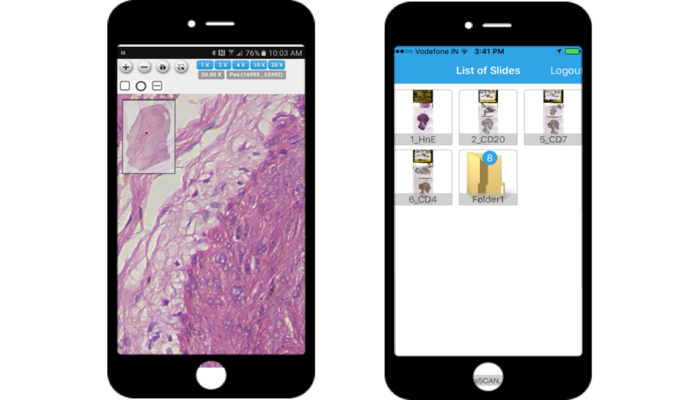 Mobile technology could act as a radical stimulus in aiding digital pathology on to a totally new level in remitting and delivering clinical diagnostics. The digital pathology market has been flooded with recent technological advances developed in smartphones and other electronic devices. This has been used to acquire and transmit digital images of the glass slide, indicative of cost savings and productivity gains over traditional forms of telepathology.

The Implications of Mobile Applications

Mobile applications revolving around digital pathology would seamlessly integrate digital pathology into the standard laboratory workflow. It would allow uploading pathology images and creating a hierarchy of cases consisting of multiple digital slides, along with relevant metadata, case history and specimen description to happen easily. With advancements in digital pathology, additional features such as analysis, interpretation of slide images and generation of diagnostic reports may become widely used. These applications would provide users access to the lab anytime and empower the pathologist to collaborate and consult with telepathologists and other experts, globally in real-time.

One example is the implementation of a digital pathology mobile app at a California based start-up pathology services lab where the primary pathologist has the image management system configured on their laptop and their portable device.  They can readily and seamlessly review, refer and generate diagnostic reports on cases assigned to them without the necessity to sit in front of their computer. Prompt e-mail notifications are generated where necessary alerting of any pending case awaiting review and to initiate a teleconference to discuss an active case with consulting pathologists (could be located globally). This routine has been well established yet is undergoing major enhancements to adapt to latest technological advancements.

Such mobile applications would not only allow collaboration between pathologists but also bridge the gap between healthcare providers and recipients. Digital pathology on mobile platforms proves to be a clear indicator of cost and time reduction for slide transportation, thereby providing faster and accurate diagnosis with a reduced turnaround time.

With the latest advancements in technology, pathologists can only benefit from implementing mobile technology into pathology labs.

This article was written by Isha Doshi, a Systems Analyst at OptraScan. OptraScan aim to eliminate the barriers to adopting digital pathology across all kinds of labs.