According to this book, there is a downside to over-sanitising a child’s environment that may impact life-long health. The authors address topics including antibiotics, probiotics, diet, breast-feeding, hand sanitisers, exposure to animals, hygiene and medical conditions from a human microbiome point of view. 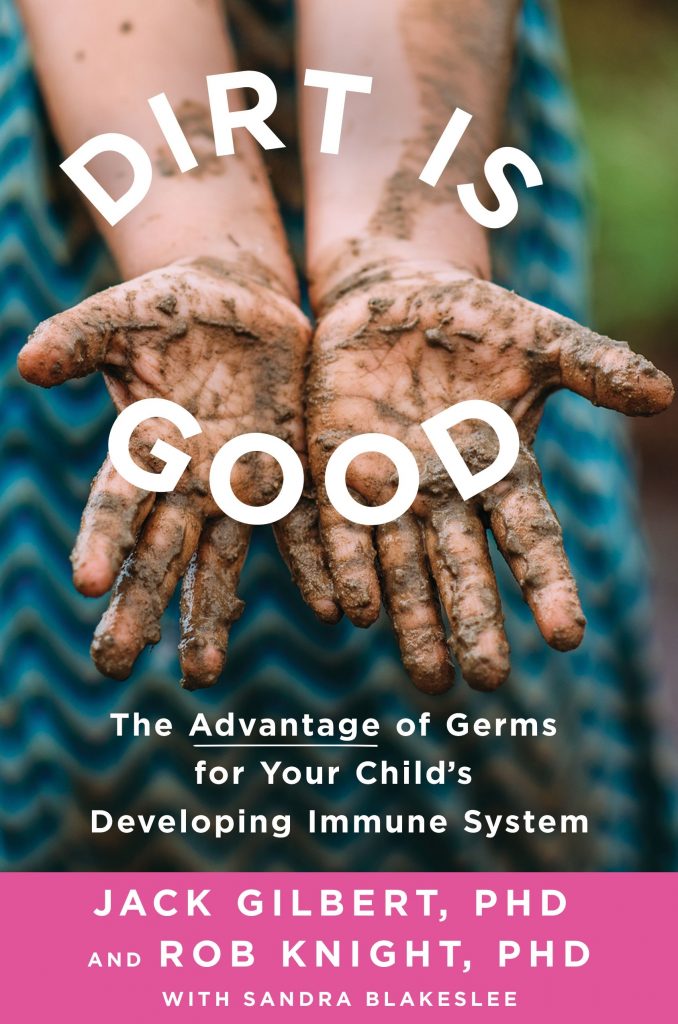 It explains that there are approximately 1.3 microbes per every human cell; the average human male has 30 trillion human cells and 40 trillion bacterial cells. The human microbiome is the collective genetic material (DNA or RNA), also known as the genome, of the microorganisms (excluding micro-animals), that reside on or within the tissue, organs and fluids of the human body. These microorganisms include prokaryotes (bacteria, archaea), eukaryotes (fungi, protists), and viruses. Gilbert, Knight, and Blakeslee explain that parents can alter the microbiome and that the first three years of a child’s life are the most impactful on developing a healthy immune system.

The probiotic industry is described as “a billion-dollar industry with virtually no medical oversight” with “no credible evidence that the regular consumption of a probiotic yoghurt (whether dairy or non-dairy) will make your child or you any healthier.” However, the authors do cite various research studies that show probiotics help to reduce ear infections, decrease the symptoms and duration of diarrhoea, improve responses to vaccines by stimulating the immune system, and even reverse peanut allergies in children.

The authors explain that there is growing evidence that bacteria found in probiotics may help the body eliminate bisphenol A (BPA), a potentially harmful endocrine disruptor, found in many consumer products, that mimics oestrogen. In a research study, rats who consumed Bifidobacterium breve and Lactobacillus casei (two friendly bacteria strains in yoghurt), had greater amounts of BPA in the faeces than in the blood and urine. Whether this also applies to humans requires further research.

According to the authors, exposing children to dirt and animals can help develop a healthy immune systems and that the benefits of antibacterial or antiseptic wipes are “generally overblown.” A wide range of consumer products such as hand sanitisers, disposable diapers, wipes, and soaps have made cleanliness and germ-fighting convenient. The authors suggest hand washing rather than the use of alcohol wipes because it could make it easier for populations of bad bacteria to thrive if the child’s hands are dried out. The authors advocate washing with plain soap and water before eating and if toddlers have touched anything that may have pathogens. They maintain that hand sanitisers and antibacterial soaps are useful in scenarios when a person is exposed to pathogens such as touching surfaces that were in contact with raw meat or in a health-care setting, but not necessary for everyday life.

The book debunks the “five-second rule” that food that has dropped on the floor is safe to eat if picked up within five seconds or less. According to the authors, an object will pick up bacteria if dropped on the surface upon contact.

“Dirt Is Good” shows that not all germs are harmful and that exposure to beneficial ones can help a child’s developing immune system. When it comes to raising healthy children, there is such a thing as being too clean.

Cami Rosso is a contributing writer at Huffpost’s Thrive Global, where she covers science, innovation and leadership. Cami can be found on LinkedIn or Twitter.

Rob Knight is a keynote at the upcoming Microbiome R&D and Business Collaboration Forum. Find out more about his presentation.

One Response to “Book Review: Dirt is Good”