Do Women in Science Need Mentors?

Dr. Catherine Kibirige currently works with the Human Immunology Laboratory of the International AIDS Vaccine Initiative in London, developing new assays and methodologies for their research.

Here, she takes us through her day, her research, and her advice for young women pursuing a career in science.

What does a typical day look like for you?

Catherine Kibirige: Generally, experimental work. I dictate my working day, but I kind of plan it so that neither I nor the technician are working too late. Sometimes, I have to do a lot of writing, so there’s a lot of data analysis and method writing involved; reviewing tables, putting computations together.

Could you tell us a little bit more about your research?

Catherine Kibirige: I’m doing HIV vaccine research. For the past 5 or 6 years, I’ve developed a lot of HIV-related diagnostic tools. After my PhD, my first postdoc was for the US Military’s HIV Research Program. I was in the diagnostics monitoring lab, so I was involved in developing ultra-sensitive HIV tests. They were doing a vaccine trial in Thailand. My work involved analysing why a very sensitive assay used in this trial did not pick up all circulating HIV sub-types. I redeveloped the assay to get better coverage of HIV subtypes, with success.

After my PhD, I went back to my old university, Johns Hopkins, because my previous advisor had a lot of archival samples and was interested in looking at HIV RNA and residual inflammation. He was part of a study where all of the patients are on HIV treatment known as HAART, which suppresses the virus effectively, making residual HIV undetectable by commercial assays. You get people who have similar HIV suppression profiles, but then some just have more inflammation than others or worse outcomes than others.  Even if they’re performing well on HAART and their HIV has come down and their immune cells (CD4 T-cells) have come back up, some of them still have a lot of more residual inflammation than others.  My previous advisor wanted to be able to study that with his archival samples. I had a tool, so I went back to his lab.  We ended up doing a collaboration with Bio-Rad and then I helped set up a ddPCR lab for him.

I returned to the UK almost 3 years ago, and now I’m working with the International AIDS Vaccine Initiative in London. 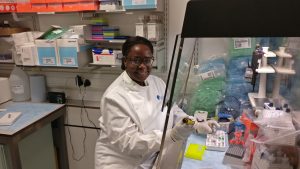 What’s been the most exciting moment of your career in science?

Catherine Kibirige: After my biochemistry degree, I went home. My parents are from Uganda and I ended up volunteering with the Ministry of Health. I got to work in HIV research in Uganda, where they first defined AIDS in Africa. It was the first region where HIV was reported in Africa.

That defined my career because I was originally receiving funding through an educational grant.  When I went to visit our collaborating labs in the US, I had to apply for a course to justify educational funding.  I wouldn’t have thought or dreamt of applying to Johns Hopkins but the most relevant department for me was molecular microbiology and immunology. Initially, I got onto the master’s program and then the PhD program.  I eventually settled in a lab headed by an investigator who had worked in San Francisco with the study that first characterized HIV in the US. When he started his PhD, they didn’t know what the virus was, so he’s been involved in HIV research from the very initial stages of its discovery. That was very exciting.

When I volunteered and initially worked for the US Military in Uganda, they had sent out their first Ugandan-based American because they wanted to set up their own separate laboratory and I was assigned to him. I helped in all the initial stages of setting up the lab. I helped get their viral load assays set up in Uganda. Serendipitously, I ended up in the Laboratory that sent him out to Uganda for my first postdoctoral fellowship.

I got to work with the scientists who developed the first viral load assay and released the first Western blot assay for HIV.  I actually got to meet the two doctors who co-discovered HIV. It has been very exciting. I would never have thought I’d be right at the forefront, meeting the original researchers, so it’s been very exciting in that sense.

That’s very exciting. The theme for next year’s International Women’s Day is Press for Progress. What do you think needs to be done to achieve progress for women in STEM?

There were very few girls in my class and I was one of only two minority students out of a class of about 30. Fortunately, every now and then, there was one teacher who really, really encouraged me. That is very important, to have a mentor who really, really believes in you.

When I graduated, many were really surprised that I managed to complete my degree; it was often assumed that I received a lot of help during my coursework.

I had always wanted to work in HIV, but I’d given up on that by the time I graduated. I wasn’t really being put forward for interviews with the big companies. When I went home to Uganda, I felt rejected and just went to rest, not quite knowing what to do. Luckily, Uganda ended up being the perfect place for me. 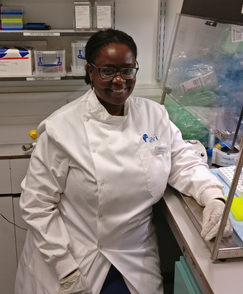 They put me right at the forefront of everything in Uganda. They put me up for Johns Hopkins. Then, at Johns Hopkins, I wanted to work in an HIV lab. I didn’t have much molecular experience, but it was the type of thing where my advisor also had limited molecular experience.  His emphasis was mainly immunology, so it was a good fit. He only took one student in his laboratory at a time. I was his first African student, and it took me some time to prove myself.

I was lucky to come back to the UK because it meant getting work with the International AIDS Vaccine Initiative. I presented at a vaccine conference in Baltimore, and it’s funny because my advisor couldn’t see the connection between what I was doing in diagnostics and how that applies to vaccines. But I could see that the assays would apply to vaccine research.

While at the conference, I met a lady who had worked in the US Military HIV Research Program and had been involved in the development of African scientists. She was the one who said she would put me in touch with the lab in London because she thought they would be interested in my research. They invited me to present at Imperial College London, which is something that I would not have even applied for on my own.

It’s just really important that we encourage women. Just to let them know that they can do it because there is a lot of discouragement for women in science.

What’s your advice for women thinking about a career in science?

Catherine Kibirige: Don’t give up, really believe in yourself and have confidence in your abilities. Women have a lot to offer. We see things from a different perspective.  We tend to be more detail-oriented and patient.  Science can be very male-dominated, especially the higher up you go. You just really have to grit your teeth and go for it, if it’s something you want to do.

Don’t be discouraged. There’s enough room and there’s a place for everybody. You can find your niche, you can find an area of expertise. It can be tough, but if it is something that you have a gift for and something you enjoy, go for it. I think we have a different way of doing things, and we’re well-suited for science.

It’s so funny but, despite the discouragement I was getting in college, one of my chemistry teachers kept telling me, “I just see you see in a lab somewhere working away. I see you doing lab work.” Every time I’m in the lab, working late, I remember her.  I don’t mind really to take the time to refine things and that’s really helped me get to where I am today.

Sign up for our qPCR and Digital PCR newsletter for the latest news and articles or take a look at the International Women’s Day website for more interviews with inspirational women.

5 Responses to “Do Women in Science Need Mentors?”