Human Genomic Evidence: Revolutionising the identification and prioritisation of targets for better medicines

Nine out of 10 potential drugs that enter clinical trials never make it to the market. Failure often occurs because the biological target chosen is not well understood. However, it is hard to objectively select targets with a high chance of clinical success because the data required to predict efficacy and safety are complex, dispersed and incomplete. To address this challenge, Open Targets was founded in 2014 as a public-private partnership by GSK, EMBL-EBI and the Wellcome Sanger Institute. The consortium has grown since its launch, welcoming new partners Biogen in 2016, Takeda in 2017, and Celgene in 2018.

Open Targets organises, evaluates and contributes to the sources of human genomic evidence that are revolutionising the identification and prioritisation of targets for new and better medicines. Our partners are united by their scientific excellence and their belief that the opportunities unfolding in target selection and validation are too big and moving too rapidly for any single organisation to successfully pursue them alone. We combine the skills, knowledge and technologies of our partners, tapping into a critical mass of expertise that would not be available otherwise. Together we want to lead the world of human target identification and prioritisation, and to change it by making our research evidence open and accessible to all. 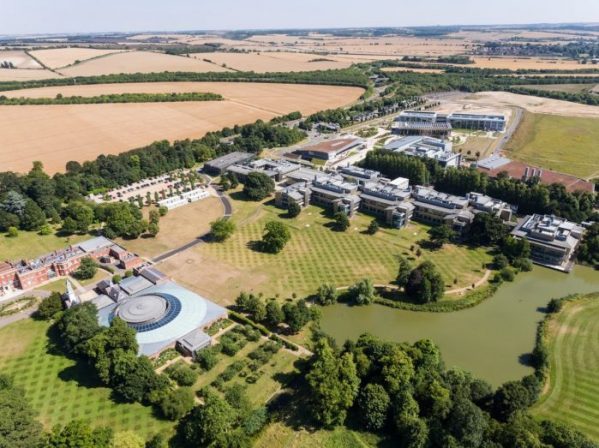 Image: The Wellcome Genome Campus, one of the hubs for innovation and expertise in genomics, bioinformatics and biodata research in the United Kingdom, is where Open Targets is located.

We have identified two connected, over-arching scientific requirements to achieve our vision of systematically identifying and prioritising targets. The first is to integrate information relevant to targets and diseases, and make it available via user-friendly web resources and application programming interfaces (or APIs). The second requirement is to increase the wealth of data that provides causal links between targets and diseases. Here, we have developed high throughput experimental projects that generate both target-centred data in human and physiologically relevant systems, such as organoids and induced pluripotent stem cells. Our research programme has so far produced 20 publications including an in-depth article on our Open Targets Platform, which was selected as a NAR Breakthrough in 2016.

The Open Targets Platform has been developed to marshal the resources of existing databases around a common infrastructure to specifically facilitate early target decisions and was launched in late 2015, as a freely available bioinformatics application. We evaluate and integrate genetic, drug and omics evidence to link targets to diseases, which can be accessed through a target-disease search engine. We have designed a user-friendly web interface enabling scientists to identify and prioritise new drug targets, and explore and investigate evidence that provides causal links between genes and diseases. The Platform is growing rapidly in terms of content and features, and receives around 1,000 unique visitors each week. We aim to release a new version of our Platform every two to three months including more data sources, features and new visualisations. We have initially focussed on publically available data sources but will soon be able to also include new data that we have generated from our experimental projects.

In addition to the Open Targets Platform our research programme will generate bespoke bioinformatics tools to support certain research projects, for example:

Our experimental portfolio focuses on generating new evidence for the identification and prioritisation of targets for oncology, immunology including IBD, and neurodegeneration.  We combine cutting-edge large-scale genome-wide studies, including genome editing and single-cell genomics, in complex human cellular models with objective statistical and computational techniques to identify and validate the causal links between targets, pathways and diseases. Our first experimental projects are maturing and starting to bear fruit. For example, we will soon be publishing the results from our genome-wide synthetic lethality screens in hundreds of cancer cell lines. This rich dataset will have many potential applications including being used to identify novel drug targets whose inhibition is lethal to cancer cells with specific mutational profiles.

By creating a virtuous cycle of data integration, hypothesis generation and data generation we aim to enhance the body of knowledge that can be used to predict safe and effective targets for drug development. We will continue to develop the Open Targets Platform with new features, data sources, new scores and analytical methodologies, aiming also to enhance our offering to statistical geneticists in the very near future. We envisage that our experimental programme will deliver further exciting results in Oncology but also in Neurodegeneration and Immunology.

David Hulcoop is the Operations Director at Open Targets. He will be presenting “Open Targets: Systematic identification and prioritisation of drug targets” at the Global Pharma R&D Informatics and AI Congress.

The Global Pharma R&D Informatics and AI Congress will take place on 29th – 30th October 2018 in London. To find out more about the event, please take a look at the agenda.