The Human Microbiome in Focus: Probiotics, Modulation and Translation – Part 2 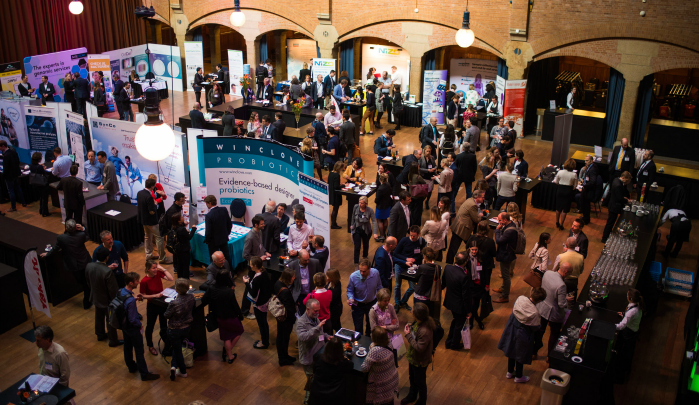 Last week, we published Duc H. Le’s summary of some of the presentations on day one. Here’s the second day summed up.

The microbial composition of the gut changes gradually with ageing and is influenced by habitual diet and health status. In one cohort studied, frail elderly had a microbiota profile characterised by an increase in Bacteroidetes and a low microbiota diversity compared to healthy elderly. Paul W. O’Toole and colleagues (Cork, Ireland) developed a bacterial artificial consortium that mimics the healthy gut microbiota composition and potentially rectifies the gut microbiota of the frail elderly.

More than 700 strains belonging to 90 bacterial species and one archaeon species were isolated in ore culture from the faecal samples of 7 healthy donors. 100 different commensal strains were finally selected from the initial collection, reflecting species with a range of abundance values in the gut microbiota based on the existing literature, and having considered the genetic similarity of the strains in order to maximise the genetic diversity of the consortium.

To further investigate the safety of the 100 selected strains, the researchers determined their MIC values using a panel of 7 antibiotics. This rationally selected consortium of 100 commensal gut microbial strains could be used as a live biotherapeutic consortium for the modulation of the elderly gut microbiota.

In a short-term randomised controlled trial (RCT), they will measure the ability of probiotics, prebiotics and polyphenols to modulate post-prandial BA profiles. In a long-term (18-month), large-scale (n=300) existing dietary and lifestyle RCT, they will also measure how polyphenol-rich foods and exercise, through BA signalling, promote metabolic health in susceptible individuals.

There is a strong interest in unravelling the molecular mechanisms involved in industrial robustness, cognate stress resistance and health-promoting phenotypes of food bacteria. This strategy, which involves the construction of genetically modified probiotics, can be divided into three distinct approaches: (i) delivery: engineering technological robustness; (ii) survival: improved competitiveness in the gut and other mucosa, and (iii) efficacy: improved therapeutic properties.

During the past two decades, major health benefits of genetically modified probiotics have been demonstrated using animal models. The field has recently moved into the era of human clinical trials which showed biological containment, safety, and tolerability with preliminary data demonstrating positive efficacy in human subjects against oral mucositis. The potential of genetically modified probiotics as therapeutic tools for their safe and efficient use in human health was outlined.