A microbiome solution for type 1 diabetes?

This article is republished with kind permission from Biovox. The original article can be found here.

Few things unite us the way trying to help a sick child does. Children living with the burden of type 1 diabetes (T1D) is just such a case. The desire to help young patients has galvanized a global effort, the TEDDY study, to understand what causes the disorder and pave the way for effective interventions. A number of analyses emerging from TEDDY are now bringing into focus the role of the microbiome in T1D. We now ask the question: could the microbiome be the key to intercepting and preventing T1D?

Type 1 diabetes (T1D) is one of the most common and serious autoimmune diseases affecting young children. In T1D, the body’s immune system goes rogue and attacks the islet beta cells in the pancreas that make insulin. Over time, this leads to the pancreas’ inability to produce insulin, which in turn leads to a dysregulation of blood sugar that can cause numerous harmful side-effects to the patient.

Unfortunately, a diagnosis typically doesn’t occur until a substantial number of islet beta cells are already dying or dead, and a child is showing pre-diabetic symptoms such as high blood sugar levels and an impaired insulin response. When pre-diabetes progresses to full T1D, a patient’s life is irrevocably changed: according to the JDRF, a 5-year-old child diagnosed with T1D faces up to 19,000 injections and 50,000 finger pricks by the time they are 18 years old. To add to these staggering figures, about 80% of people with T1D do not control their blood sugar levels well enough to avoid the increased risk of long-term complications such as heart disease and stroke.

There is currently no cure for diabetes, only daily insulin-based treatments, and the reality is that only a fraction of children and adults with T1D achieve acceptable blood sugar control. This means that T1D children are left to face a future of daily insulin injections and potentially devastating side-effects.

What does the microbiome have to do with it?

T1D is believed to be caused by a combination of genetic and environmental factors, but we still don’t know exactly what triggers the disorder. What is clear, however, is that an ideal therapeutic strategy for T1D would aim to prevent the disease before the immune system goes rogue or intercept the disease before the immune attack has destroyed sufficient islet beta cells to cause insulin dependence.

This concept of disease prevention and interception – arresting a disease prior to clinical onset – is central to how we at Janssen are approaching the development of next-generation health solutions: rather than managing disease, the cornerstone of the current healthcare system, we strive to promote wellness by detecting and preventing or intercepting disease altogether.  In the case of T1D, such an approach would translate into catching the disease before the child becomes symptomatic, a point at which the pancreatic cells are already too far gone to be saved. 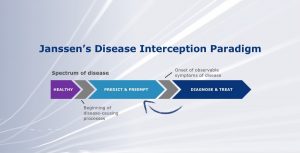 Janssen Pharmaceutical’s Disease Interception Paradigm for a world without disease

During the early development of the immune system, the body undergoes the vital process of establishing immune tolerance. This is where the immune system gains the ability to distinguish between the body’s own cells and foreign cells such as pathogens. The body essentially defines which tissues and organs are ‘self’ and which are ‘other’, where ‘other’ cells will automatically be attacked. Autoimmunity occurs when this process malfunctions and the body starts misinterpreting its own cells as foreign, resulting in autoimmune diseases such as T1D.

Immune therapies for T1D have been under development designed to modulate the immune system so as not to attack its own pancreatic cells. Despite disappointments in some early clinical trials, a new generation of immune tolerance boosting therapies is now under development. However, another potential modality has recently been gathering momentum: microbiome-based early interventions for T1D.

We now know that the microbiome is a potential major contributor to our wellbeing. The gut microbiome has been shown to play a particularly important role in the development of our immune systems, including in the establishment of immune tolerance. In T1D, disease development has been associated with early life microbiome imbalances, occurring around the time immune tolerance is being established. Though we have yet to determine how exactly this process plays out, if a dysbiotic microbiome is to blame for T1D development, then the microbiome may also be modulated to prevent the disease in at-risk children.

As pointed out by others, the microbiome might ultimately provide a safe and cost-effective public health solution for the prevention of T1D globally.

The Environmental Determinants of Diabetes in the Young study (TEDDY) is an international project set up over a decade ago to investigate the underlying causes of T1D. The largest and most comprehensive study of its kind, the TEDDY study is tracking over eight thousand American, Swedish, Finnish, and German children, with an elevated risk of T1D development, from birth through to 15 years of age. 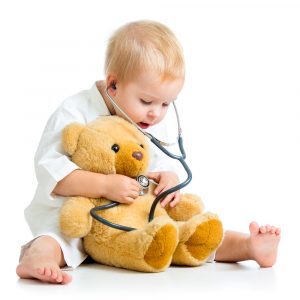 One purpose for the TEDDY study is to understand the role of the microbiome in T1D development. Analyses of the TEDDY cohort have shown the existence of a number of microbiome maturation stages that correlate with the development of T1D and are characterized by dynamic taxonomic profiles dominated by Bifidobacterium sp. or Proteobacteria. Further study of the functional aspects of the microbiome has revealed that it can play a protective role against autoimmune issues, through the production of beneficial short-chain fatty acids, with yet another analysis indicating that an early exposure to beneficial microbiomes can help reduce the risk of T1D onset in infants.

These findings have led to the hypothesis that maintaining a ‘healthy’ microbiome in infants may help delay the onset of and reduce the overall risk of developing T1D. A delayed onset of the pre-diabetic state could potentially allow time for intervention and even prevention of T1D. In other words, by nurturing the early microbiome, we may be able to train the immune system to avoid the onset of disease. The implications could be enormous, not only for T1D, but also for other autoimmune diseases such as celiac disease, eczema and food allergy, and rheumatoid arthritis.

Working toward a world without T1D

The microbiome represents a new frontier for medicine, full of extraordinary potential. The benefits of microbiome-based therapies could potentially provide interventions that may help prevent and intercept disease. Through further study of microbiome-related disorders such as T1D, we may uncover innovative ways to not only delay their onset but to potentially avert such diseases altogether.

Currently, a child diagnosed with T1D faces a bleak prospect of painful injections and little chance of a cure. However, with new insights into the role of the microbiome in T1D and health, children with T1D today and on a trajectory to disease in the future may have a chance to circumvent this debilitating condition using their own microbiomes as symbiotic soldiers in the fight for health.

The Microbiome & Probiotics Series: Europe will take place on the 20th – 22nd May in Rotterdam. Made up of the Microbiome R&D and Business Collaboration Forum, the Skin Microbiome & Cosmeceuticals Congress and the Probiotics Congress, your ticket gives you access to all three events. View the agenda.