Molecular Diagnostics for the Point of Care 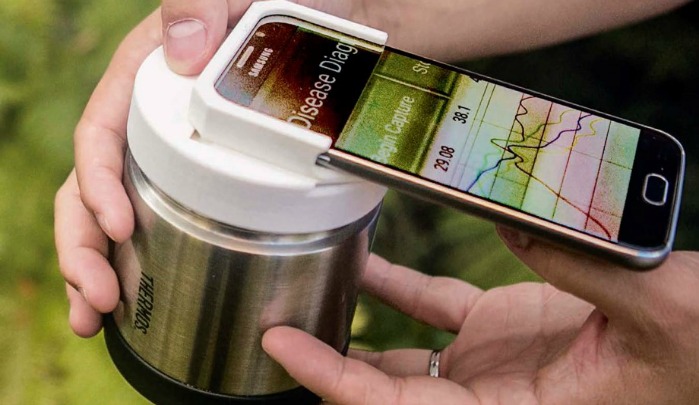 Here, we use the term molecular diagnostics to refer to tests that detect the presence of specific nucleic acids in a clinical specimen such as blood, urine, faeces, saliva, and tissue. These nucleic acids serve, among other things, as biomarkers for the presence of infection-causing pathogens (e.g., DNA and/or RNA from bacteria, virus, and/or parasites); diseases such as cancer (characterised by mutant alleles), and genetic abnormalities.

Nucleic acids enable highly specific identification of organisms and mutations and can detect drug-resistance. Moreover, nucleic acids do not usually persist as long as antibodies after cessation of disease, providing a better indicator of the active state of disease. In many cases, nucleic acids are present, however, at low concentrations that challenge direct detection.

The use of Polymerase Chain Reaction (PCR)

Nucleic acids have, however, a unique attribute – they can be amplified. With the aid of polymerase enzymes and sequence-specific oligo primers, one or more selected DNA segments can be converted into millions of copies within a short amount of time (20-60 min) and with high fidelity. The enzymatic amplification method, Polymerase Chain Reaction (PCR), was originally developed by Mullis in the 1980s and requires thermal cycling. While RNA cannot be amplified directly, it can be reverse-transcribed into complementary DNA (cDNA) that can then be amplified. In recent years, isothermal amplification schemes have been developed that do not require precise thermal cycling such as Loop Mediated Amplification (LAMP) and Recombinase Polymerase Amplification (RPA), simplifying equipment requirements. Once amplified, amplicons can be readily detected by various means, including by eye.

While RNA cannot be amplified directly, it can be reverse-transcribed into complementary DNA (cDNA) that can then be amplified. In recent years, isothermal amplification schemes have been developed that do not require precise thermal cycling such as Loop Mediated Amplification (LAMP) and Recombinase Polymerase Amplification (RPA), simplifying equipment requirements. Once amplified, amplicons can be readily detected by various means, including by eye.

Given the many advantages of nucleic acids as biomarkers and their amenability to amplification, state of the art laboratories routinely use enzymatic amplification of nucleic acids as the method of choice for detecting infectious diseases, drug resistance, mutant alleles associated with diseases such as cancer, and genetic disorders. In many cases, nucleic acid-based detection is the gold standard.

To enable enzymatic amplification, the nucleic acids need to be isolated and purified. In laboratories, this is accomplished with a few unit operations that vary depending on the sample type and target nucleic acid. For example, when one seeks to detect a pathogen such as Zika (RNA virus, ZIKV) in blood, the unit operations would include (i) serum separation from whole blood; (ii) lysis to extract RNA from the virus; (iii) isolation, concentration, and purification of nucleic acids; and (iv) amplification and detection. These operations require well-trained personnel and sophisticated equipment, ranging from centrifuges to spin columns, to thermal cyclers. Due to their complexity, by and large, molecular diagnostics has been confined until recently to well-equipped, centralised laboratories.

Diagnosis outside of the lab

In many cases, it is advantageous to carry out the diagnosis outside the lab. Many regions of the world are poor in resources. Centralised laboratories are often located far away from patients and lack sufficient capacity, precluding many patients from access to molecular diagnostics. Even when centralised laboratories are available, it may require a few days to obtain test results.

To address the needs of resource-poor settings and to enable evidence-based health care, it is desirable to make molecular tests available at the point of care (POC). POC molecular testing alleviates shortages of centralized facilities and trained personnel, arms health care providers with means to correctly identify causative agents in real time, and enables patients to self-diagnose at home, reducing lost productivity associated with travel to medical facilities, enabling personalized medicine and drug administration based on need rather than one size fits all, and alleviating stigma such as in the case of sexually transmitted diseases.

POC molecular testing alleviates shortages of centralized facilities and trained personnel, arms health care providers with means to correctly identify causative agents in real time, and enables patients to self-diagnose at home, reducing lost productivity associated with travel to medical facilities, enabling personalized medicine and drug administration based on need rather than one size fits all, and alleviating stigma such as in the case of sexually transmitted diseases.

Bringing molecular diagnostics to the point of care

A number of strategies have been adapted to bring molecular diagnostics to the point of care. One school of thought advocates the use of biosensors to directly detect nucleic acids. The main marketing point of this approach is enzyme-free detection to avoid the complexities of enzymatic amplification. Biosensors typically rely on nucleic acid hybridization to immobilised ligands and the detection of captured molecules either with reporters such as beads and fluorescent labels or label-free via capacitance or electrochemical detection.

Since, in many cases, the targets are of low abundance, to achieve reasonable sensitivity, biosensors need to operate with purified and consistent samples, use highly sensitive detection methods, and, occasionally, rely on signal amplification, which may amplify both the desired signal and noise. Although, in principle, one can detect a single molecule, in practice the sensitivity of biosensors are many orders of magnitude less than that of enzymatic amplification-based schemes while the advertised reduction in process complexity and cost is questionable.

A second approach automates standard laboratory procedures. To enable the molecular detection to be carried out in the field, automated instruments are developed, and a few are commercially available and FDA-approved. These machines automate most or all unit operations required for nucleic acid amplification and detection. Ideally, the operator introduces a sample into the machine that carries out all unit operations and provides test results. These automated machines alleviate the shortage in trained technicians and minimise operator’s errors. They are, however, relatively expensive, low-throughput, and maintenance-heavy, and likely suitable for medical centres – not for home use.

A third approach, dubbed rapid nucleic acid detection, foregoes all or most sample preparation steps. The operator introduces a small volume of a minimally treated sample into the enzymatic amplification chamber. Since the sample often contains inhibitors, the sample volume must be a small fraction, typically less that 5%, of the reaction mix volume. These rapid tests utilise isothermal amplification strategies to minimise or eliminate instrumentation. However, the necessity to operate with very small sample volumes adversely impacts assay sensitivity, typically resulting in limits of detection of >106 copies/mL.

At Penn, we have adopted a somewhat different approach. Our objective is to make the nucleic acid detection nearly as simple as the popular immunoassay dipstick while maintaining the sensitivity of state of the art laboratories. We accomplish this by combining and streamlining the various unit operations needed for enzymatic amplification. 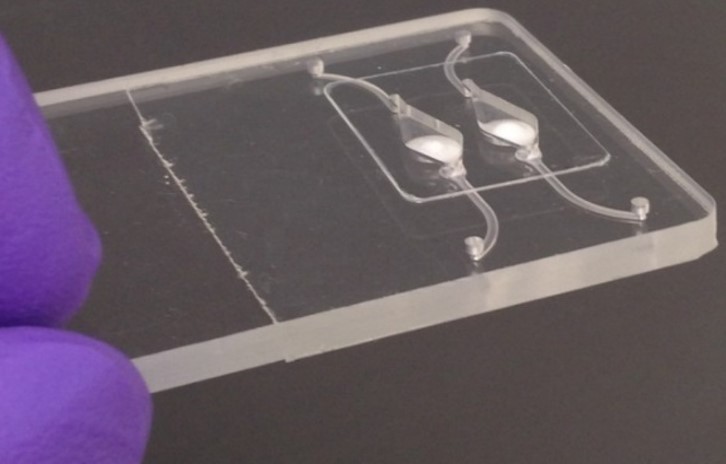 The amplification process can be tracked, in real time, by a variety of means such as intercalating dyes that either change their emission intensity (fluorescence) or color (Leuco crystal violet) in the presence of amplicons (dsDNA); molecular beacons; and polymerase reaction products that, among other things, fuel bioluminescence (detectable visually or with a cell phone camera) and include protons detectable electrochemically or with an indicator dye (due to their effect on solution pH). 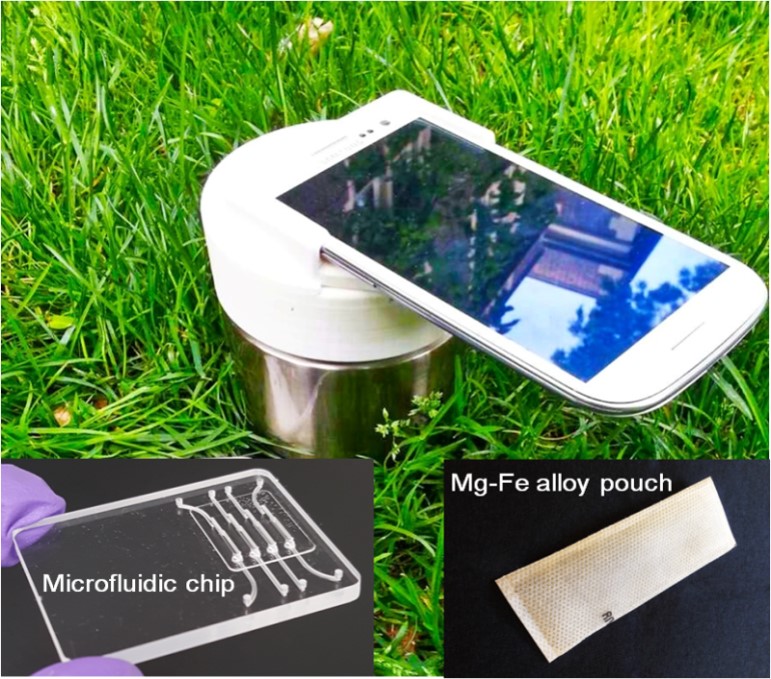 When the reporter is fluorescent, it can be excited with a smartphone flash. Fluorescence emission or colorimetric signal can be recorded, analysed, and transmitted with a smartphone4,5 (Fig. 2). The assay sensitivity varies from target to target but generally is on the same order of magnitude as the laboratory-based gold standard. For example, in the case of HIV, we detected fewer than 10 virons in a sample. This is equivalent to 100 virons/mL when the sample volume is 100μL.

When operating with complex samples such as blood, prior to sample introduction into our amplification reactor, we separate plasma from the whole blood with a simple superhydrophobic plasma separator (Fig. 3) that relies on both filtration and sedimentation without a need for centrifugation, and that can operate with relatively large volumes of blood6,7. The plasma separator can, however, be interfaced with the microfluidic cassette depicted in Fig. 1. Samples such as urine or saliva require simpler preprocessing.

Since patients’ symptoms are often non-specific and co-infections may alter symptoms, there is a need for co-detection (multiplexing) of multiple possible targets. For example, regions endemic with the Zika virus are also susceptible to many other vector-borne viruses such as dengue, chikungunya, and yellow fever – all resulting in similar initial symptoms, but may require diverse disease management.

We meet this challenge with a two stage isothermal amplification process dubbed RAMP8 (Fig. 4). RAMP’s first stage consists of an RPA process that amplifies all the targets of interest present in the sample. The RPA products are then distributed into individual LAMP chambers each specialised to detect a single target. This two-stage amplification process allows us to co-detect multiple targets (up to 16 have been demonstrated) with a greater sensitivity than either RPA or LAMP alone. 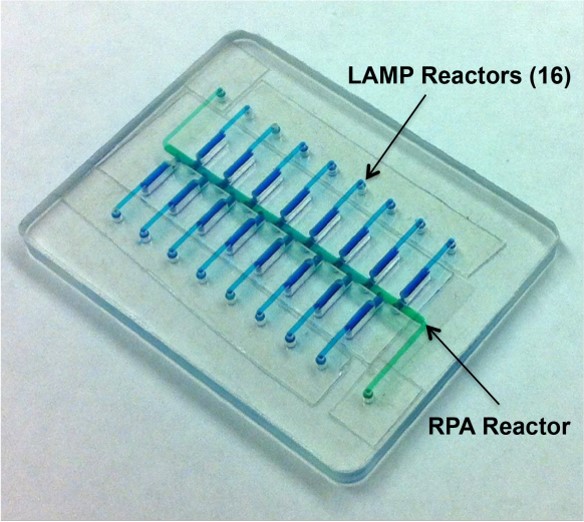 The isothermal amplification processes that we use require incubation at a specific temperature. The required power can be readily provided with a battery and the temperature controlled with a simple electronic circuit. More interestingly, we can operate our devices electricity-free (Fig. 2). In this case, an exothermic chemical reaction provides the heat. A magnesium alloy reacts with water to produce heat in the same way as hikers warm ready to eat meals.

Currently, the operation of our molecular diagnostic cassettes requires a few pipetting steps. Although simple, such pipetting operations are deemed too complex for point of care and home use. Hence, our short term plan is to design, prototype and test manually operated cassettes that eliminate the need for pipetting and can operate with minimal or no instrumentation.

Haim Bau is Professor of Mechanical Engineering and Applied Mechanics at the University of Pennsylvania.

Sign up today to the microfluidics newsletter so you don’t miss out on future articles.