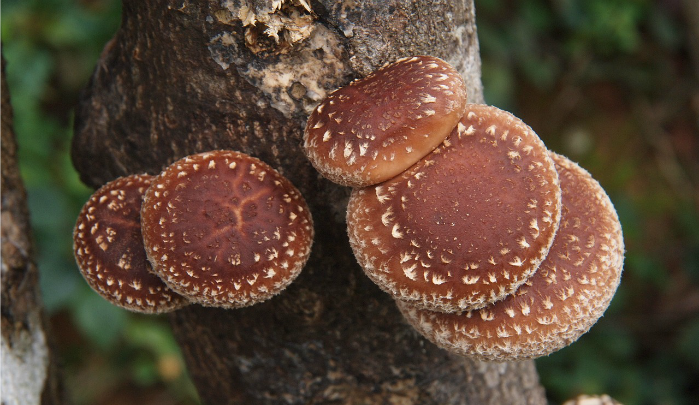 Edible fungi or mushrooms are widely used as healthy food and nutraceutical products due to their high nutritive and medicinal value. The world production and consumption of edible and medicinal mushrooms has experienced a steady increase over the last few decades (>25-fold increase in 35 years from 1978  – 2012) and is projected to grow at 9.5% annually from 2014 to 2019, tripling the world GDP growth from 2013 – 2018 (2.5 – 3.0%).

Polysaccharides are the major bioactive constituents of mushrooms, for example, β-glucans have shown notable antitumour, immunomodulating, anti-inflammatory effects amongst other health benefits. In several common edible mushrooms, the total carbohydrate contents are 50-80% and crude fibre 7-20%. A variety of polysaccharides have been found in mushrooms such as chitin, β and α-glucans, mannans, xylans and galactans, and various heteropolysaccharides composed of arabinose, mannose, galactose, xylose, glucose and glucuronic acids.

As most of these polysaccharides are non-starch and non-digestible by the digestive enzymes in the human gastrointestinal tract, they can be utilised as dietary fibres by the gut bacteria in the large intestine. In this regard, mushrooms are recognised as a promising source of prebiotic fibres with beneficial effects on the gut microbiota and human health. Several recent studies have shown the potential prebiotic functions of polysaccharides from some important medicinal mushrooms such as Lentinus edodes (Shiitake), Trametes versicolor (Yunzhi), and Ganoderma lucidum (Reishi).

My research group has a long-term focus on the polysaccharides and other useful products from mycelial fermentation of a Cordyceps sinensis fungus Cs-HK1. C. sinensis, generally known as the Chinese caterpillar fungus, is a rare and precious medicinal fungus which has been has been used in China for centuries as a tonic for improving health and quality of life. Cs-HK1 is a fungus isolated from a wild C. sinesis fruiting body in our lab and fermented to produce fungal biomass and exopolysaccharides (EPS).

The Cs-HK1 mycelial fermentation has been successfully scaled up with industrial fermenters of up to 10,000 L, yielding 20-25 g/l biomass and 4-5 g/l EPS in 5-6 days. This EPS is composed of high molecular weight polysaccharides (over 106) and PSP complexes.

Currently our research is investigating the prebiotic functions of the Cs-HK1 EPS and some other natural polysaccharides. It has been shown that the EPS and its partially degraded fractions can stimulate the growth and short chain fatty acid production of bifidobacteria, and protect against antibiotic damage to the bifidobacteria population.

Dr. Jian-Yong Wu
is an Associate Professor of Food and Bioprocess Technology at The Hong Kong Polytechnic University. Jian-Yong has published more than 150 peer-reviewed articles and recently chaired a track at the 3rd Microbiome R&D and Business Collaboration Congress: Asia.

Find out more about the microbiome series of events.