Microfluidics: How origami is saving lives in Africa

This article was originally published by The Scottish Funding Council in May 2018 and is published here with permission.

A folded piece of paper could save lives in Uganda, says Glasgow University’s Prof Jonathan Cooper.

Apac is a district in central Uganda sitting just north of the equator. Its main village is surrounded by Lake Kyoga and the Arocha and Wirewiri swamps. It also has an unusually hot microclimate producing an environment that results in the region having the highest number of mosquito bites per person in the world – on average, each person is bitten five times per night, year-round. The local health workers refer to these as “innoculations” – for, despite years of mass drug administrations, insecticide spraying and distribution of nets, it remains one of the most malarial districts in the world.

Surprisingly, we were not aware of this unwanted global positioning before organising this trip to Apac and it is not the fight against malaria that brought us here. The waters are also home to a parasitic trematode worm that causes schistosomiasis, a disease that infects humans, with the parasites living in the veins surrounding the liver. The worms produce eggs continuously, which return to the lake either in urine or faeces, where the offspring hatch and infect snails. As the day heats up many thousands of larvae burst from snail, and infect humans to complete the lifecycle.

The still water of the lake and swamps provides a year-round breeding ground, both for the snail and the mosquito – making Apac a particularly challenging place to live. The unusually warm microclimate not only contributes to the very high mosquito bite rates, but brings people to the lake to collect water and swim where they are infected by schistosomiasis. 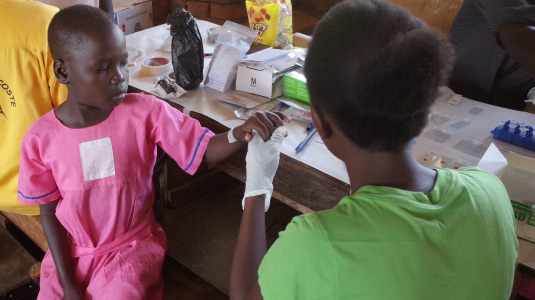 How origami is saving lives in Africa

We are here to develop a new “origami” paper test, funded by the SFC Global Challenges Research Fund – using the principles of paper-folding to make very low cost DNA based tests that can diagnose the species of the micro-organism infecting patients. From just a finger-prick sample of blood, smeared on a piece of paper, we can inform the appropriate treatments for these infectious diseases.

We arrived in Apac at dusk. We had been told there are good guesthouses in the village, although seemingly none with sealed windows. As the light rapidly fades, and the mosquitos begin to fly, there is the immediate and practical task of assembling the bed-netting.

We all always try to double net our beds – as hostel nets are invariably torn or damaged. The mosquito is also adapting its behaviour, and hides during the day under beds. This is all done with a sense of guilt as many locals are sleeping with no nets. We can at least feel safe at night, despite the open windows.

We spend the days working in the schools testing the origami diagnostics with a team of nurses and technicians, from the Ministry of Health. In future we also have ambitions to explore new tests around the emergent threats of drug resistance (parasites, resistant to treatments are emerging across Africa, making precise diagnosis all the more important).

The 4BIO Summit: Europe will take place in Rotterdam in October. Take a look at the agenda to find out more.