Stem cell based anti-NASH drug testing: a pragmatic approach for a complex disease

However, 5-10% of the cases proceed to NASH in which hepatic inflammation occurs and for which no drugs currently exist. While NAFLD is closely associated with the occurrence of the metabolic syndrome, it also 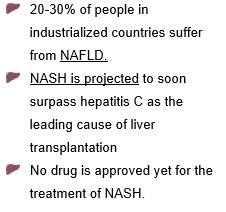 holds distinctive risk factors such as the carriage of particular genetic backgrounds [1][2].

Today’s investigation of NAFLD and NASH relies mainly on animal models, which are subject to ethical discussion and often poorly representative of the human situation due to interspecies differences [3][4]. Therefore, we aim to develop a predictive, human-based in vitro model for the assessment of the efficacy of potential anti-NASH compounds.

Five years ago, the In Vitro Toxicology & Dermato-Cosmetology (IVTD) team at the Vrije Universiteit Brussel (VUB) established a novel hepatic in vitro system based on sequential exposure of human skin-derived precursors (hSKP) to hepatogenic growth factors and cytokines, mimicking liver development in vivo. 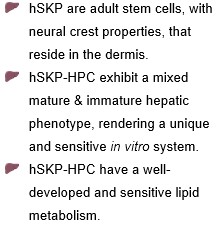 A major stumbling block in anti-NASH drug discovery and development is the lack of human-relevant preclinical models [4]. It was previously shown that an in vitro model of NASH was able to predict the efficacy of obeticholic acid, a clinical phase III anti-NASH compound [8]. However, this system relies on human primary hepatic cells, which are scarce due to intensified transplantation programs and are frequently obtained from patients suffering from severe liver conditions or under a heavy multidrug regimen, affecting their quality [3].

As presented at the 2nd Global NASH Congress, this in vitro system revealed the anti-NASH properties of (among others) elafibranor, a dual PPAR-α/δ agonist currently under evaluation in a phase III clinical trial [9]. Elafibranor reduced the accumulation of intracellular lipids (Figure 1) and attenuated the inflammatory response of ‘hSKP-HPC NASH’, reflecting candidate drug’s effects in patients. 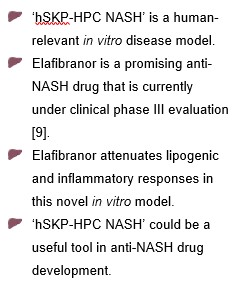 This research was conducted by Joost Boeckmans, a third-year PhD-student at IVTD (VUB, Brussels, Belgium), Robim M Rodrigues, professor at IVTD, and Tamara Vanhaecke, head of the department at IVTD.

More posters and presentations from the Global NASH Congress can be found on the resources page. Click here to read, listen and watch in your own time.