The future of cancer therapeutics in the biomaterials space

We caught up with Morgan Alexander, Professor of Biomedical Surfaces, University of Nottingham, to discuss the issues within the NHS, barriers to moving biomaterials work into the clinic, and exciting advancements within the biomaterials space.

Could you tell us a little bit more about your current position as professor of biomedical surfaces and director of the EPSRC Programme Grant at Nottingham?

We focus on the intersection between the materials and cells. The materials we most commonly work with are polymers and we have quite a broad range of cells that we’re interested in, including unwanted cells such as pathogenic bacteria.

We are particularly interested in reducing the rate of infection in medical devices such as catheters and other implants, which have quite a high infection rate, thus costing the NHS around £1 billion a year. We recently managed to take a polymer, which we discovered through materials screening over the last ten years and we’ve got that in clinical trials at the moment with a urinary catheter. What that does: it controls the formation of biofilms on the surface, which discourages bacterial cells from forming biofilms, which are these colonies of bacteria, which resist host defences and antibiotic clearance. In this particular device, the bacteria does not from biofilms, so the host’s immune system can clear them, or you could use antibiotics to kill them. We don’t actually try to kill them ourselves for a range of reasons. 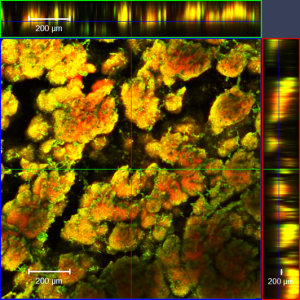 We’re also interested in regenerative medicine. Specifically, controlling stem cells and stem cell behaviour on polymer surfaces. That enables us to manufacture stem cells on nice, defined polymeric surfaces rather than animal-derived materials, which have batch-to-batch variation and, in general, they are ideal for removal from the system.

If people want to start manufacturing stem cell-related therapy, you’re going to need many, many millions, billions of cells for each intervention. So, we have discovery programmes where we are screening polymers to find the best polymers, which are available for the job to identify materials, which are of use there. And that has use in toxicological drug screening for development of drugs in the pharmaceutical industry.

Then we have interests in the area of immune cell control. In particular, we are interested in macrophages, which are the sentinels of the human immune system. They control the response of our bodies to devices such as medical implants and controlling the body’s response to those is a very significant challenge. However, we have identified materials, that have the ability to control the body’s response to implants.

The last area is the use of polymers that can deliver chemotherapeutics to target and respond to the tumour environment, and how materials can help that as well. And all these projects are encompassed within our Biomaterials Discovery group and have been funded by the EPSRC grant.

We also have quite a significant interest in the fundamentals of the reasons why these things occur. We’re looking at the mechanism of the identification and the discovery element, where we’re trying to discover new materials. We have a large amount of work to do to try to understand the mechanism of action behind these materials. The process is as follows: we discover the most interesting materials, then we spend time after we have discovered it, putting effort into understanding why it works.

Do you think that biomaterials can benefit the NHS in other ways?

If you take £1 billion a year in device-centred infections… let’s say you could make a 10 percent reduction in that. Not only would you of course make a massive financial saving, but you would also make massive savings for the health and wellbeing of all the people who are behind those numbers of infections, which have extended stays in hospitals and are, ultimately, being very ill when they’re actually in hospital for a completely different reason.

Of course, there are also people who are in long-term care such as care homes, where catheter-associated infections are very common. They have been for a long time. Currently in the NHS, there’s a big debate about how access to treatment can be managed with the ageing population. Population is the imperative that we really place in our work. Today’s ageing population is actually outnumbering its teenagers for the first time, which shows how the demographic is changing.

As you get older, you develop many different health problems and we have the answers to these problems, but society can’t afford to pay for all of those answers. Anything that we can do to reduce the cost is going to help patient’s wellbeing, but that doesn’t mean that treatment will be available. So, by making cheaper catheters, for example, money can be spent elsewhere on things like cancer therapeutics.

What would you say the best thing about being an academic in the biomaterials space is?

There’s lots and lots of opportunities. Biomaterials are very powerful and you can see that by that fact they are employed ubiquitously in healthcare and they are necessary. There’s great opportunity to improve the ones which are used at the moment, and many of them were chosen by virtue of them being available at the time. For example, the material that is used to make a lot of catheters is a particular kind of silicone rubber that was a material that was initially developed as an electrical insulator. Clinicians who needed to drain fluid from the body and enter fluid into the body used this material as a biomaterial for which it’s okay – it’s got good mechanical and chemical properties, but unfortunately it hasn’t got very good properties when it comes to biofilm formation. So, improving upon it to reduce infection rates was a great opportunity. We hope we’re on the right path to achieving that.

What would you say are the biggest barriers to moving biomaterials work into the clinic at the moment?

That’s a good question. Some people would say funding, but we’ve been lucky because we’ve been funded really well, so I wouldn’t make that complaint, but I think I should make that statement on the basis of people who have been affected. Far more work is proposed than is actually done. So, I would say that funding for both applied and basic research is one of the key challenges.

But then once you have your great idea and you’ve proved it in the lab, proving it in preclinical models is expensive, so that requires good funding as well. Then you end up going up against the regulators of new treatments, so that is a slow and expensive process. Granted, it is a necessary step for the public, but it is a significant barrier.

Again, you can quantify that in terms of money vs time, but I think the cost of it, the investment required to get through the process, and the process of trying to establish a collaboration with industry is time consuming and costly. We were lucky that, with our device, we didn’t have to take it through this process. We partnered with a company who had an interest in this area and the required investments and grants to go through the process.

Therefore, I would say that probably that the main barriers are funding, the environment, and regulation. The UK is willing to try new things, but unfortunately, we have more good applications than we have money. 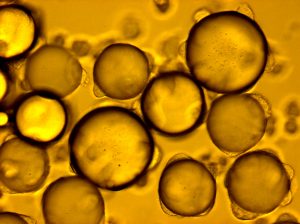 Are there any exciting advances that we should be looking out for in the next 5 years within the biomaterials field?

There’s a lot of exciting work going on! Particularly in cancer therapeutics and there’s some exciting work where biomaterials is involved in that. David Mooney has got some really interesting implants in biomaterials, which are used to reprogram immune cells, specifically T-cells, to fight cancer in the body. That’s currently going clinical therapeutic trials at the moment.

Could you tell us a little bit more about your upcoming presentation at the Global Biomaterials and Tissue Engineering Congress?

I will be talking about the discovery of bio-instructive materials at the event. As I mentioned earlier, materials that have been chosen largely on the basis of their availability and mechanical properties dominate the range of biomaterials found in the clinic today and it would be desirable to design our way forward from this situation to new and better biomaterials chosen for positive interactions with surrounding cells and tissues.

At the event, I will be talking about the way in which my team have taken a high throughput screening approach to discover new bio-instructive polymers from large chemical libraries of synthetic monomers presented as micro arrays- this approach is akin to engineering serendipitous discovery and will be exemplified using examples that have been taken from the lab all the way to the clinic.

Are there any speakers that you’re looking forward to meeting at the event?

I’m looking forward to catching up with Paul Hatton from the University of Sheffield, who will be presenting on engineering bioactive glass and ceramic for mineralised bone tissue repair. I’m also looking forward to seeing Sian Harding’s research into pluripotent stem cell-derived tissues for cardiac repair, as well as Fred Claeyssens, who will be talking about light-based additive manufacturing for tissue engineering.

Morgan Alexander is Professor of Biomedical Surfaces at the University of Nottingham, the Director of an EPSRC PG in Nottingham,  and a Wellcome Trust Senior Investigator.

The Global Biomaterials and Tissue Engineering Congress will take place on 12th – 13th November 2018 in London. To find out more about the event, please take a look at the agenda.